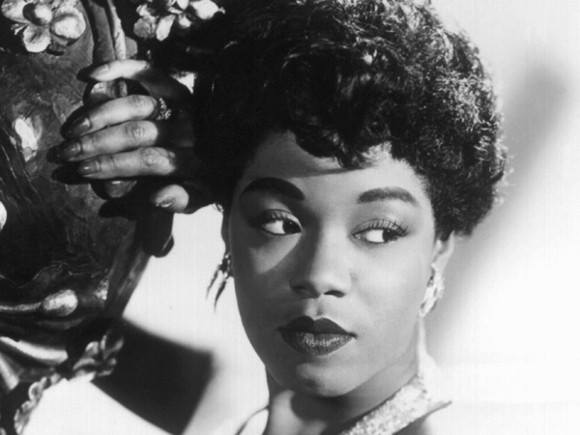 GM – FBF – “When I sing, trouble can sit right on my shoulder and I don’t even notice.” – Sarah Vaughan

Remember – “When I sing a tune, the lyrics are important to me. Most of the standard lyrics I know well. And as soon as I hear an arrangement, I get ideas, kind of like blowing a horn. I guess I never sing a tune the same way twice.” – Sarah Vaughan

Sarah Vaughan was a popular twentieth century African-American Jazz singer. She was recognized for her beautiful voice and often nicknamed ‘Sassy’, ‘Sailor’ and ‘The Divine One’ for her salty speech. Moreover, she won a Grammy Award and was awarded the “highest honor in jazz” by The National Endowment for the Arts.

Sarah Lois Vaughan was born on March 27, 1924 in Newark, New Jersey to carpenter and guitarist father, Asbury Vaughan. Her mother also had a singing background as she used to sing in choir. During the First World War her family moved from Virginia to Newark. Sarah began to take piano lessons at the young age of seven. She would sing in the church choir and play piano at different services. The popular records and radio music were her favorite. Newark in those days had an active live music scene at night clubs. Seeing various bands on tour performing at those clubs inspired Sarah and she ventured into Newark’s night clubs and performed as pianist and sang occasionally.

At first Sarah went to Newark’s East Side High School and later transferred to Newark Arts High School. However, the academic pressure began to affect her love of music and late night performances, thus she dropped out of the high school. This time around Sarah and her friends began to wander across New York City to catch popular bands playing music. Inspired by their performances, Sarah tried her luck at Harlem’s Zeus Theater. It is recorded by some biographers that she immediately became popular after that amateur night performance. Soon after, she was introduced to bandleader and pianist Earl Hines. He took her under his wings and replaced the current male singer in his band with her. During 1943 to 1944, Sarah Vaughan toured with Hines’ band which she joined as a pianist. But when Hines brought another pianist to the band, her duties became limited exclusively to singing. The major band member Billy Eckstine, left the band in late 1943. He gathered various talented jazz artists to perform in his band. Upon invitation from him in 1944, Sarah accepted the offer to join his new band. It was an opportunity for her to develop and polish her skills as a musician under the supervision of such great talented music artists. She was given the opportunity to record her first song, “I’ll Wait and Pray”. Eventually, she left Eckstine’s band in order to pursue a solo music career. Although, they continued to work together on several music projects and remained close friends.

In 1945, Sarah launched her solo career as she did freelance performances at night clubs, such as the Onyx Club, the Famous Door and the Three Deuces. She recorded “Lover Man” for the Guild label, the same year on May 11. Henceforth, she recorded music for several record labels including the Musicraft label and the Crown and Gotham labels. During this time she was also performing at Café Society Downtown in New York, where she met trumpeter George Treadwell and they became friends. He later was appointed as her manager and handled the musical director responsibilities for her, which allowed Sarah to solely focus on singing.

Some of her well-known music that she recorded for Musicraft include “I’ve Got a Crush on You”, “If You Could See Me Now” and “Don’t Blame Me”. Her “Tenderly”, became a smashing hit in 1947. One after another hit led to Sarah Vaughan’s ultimate stardom.

In 1989, Vaughan’s health began to decline, although she rarely revealed any hints in her performances. She canceled a series of engagements in Europe in 1989 citing the need to seek treatment for arthritis in the hand, although she was able to complete a later series of performances in Japan. During a run at New York’s Blue Note Jazz Club in 1989, Vaughan received a diagnosis of lung cancer and was too ill to finish the final day of what would turn out to be her final series of public performances.

Vaughan returned to her home in California to begin chemotherapy and spent her final months alternating stays in the hospital and at home. Vaughan grew weary of the struggle and demanded to be taken home, where she died on the evening of April 3, 1990, while watching a television movie featuring her daughter, a week after her 66th birthday.

Vaughan’s funeral was held at the new location of Mount Zion Baptist Church, 208 Broadway in Newark, New Jersey, with the same congregation she grew up in. Following the ceremony, a horse-drawn carriage transported her body to its final resting place in Glendale Cemetery, Bloomfield in New Jersey. Please, please research more about this great American because I could not put her whole life in and share with your babies. Make it a champion day!