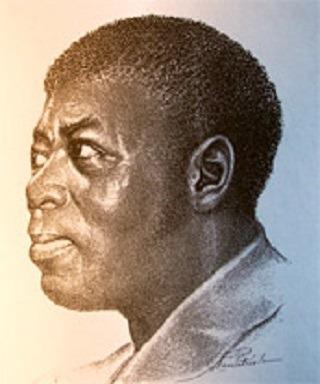 GM – FBF – Today I travel back to my family and friends in Central N.J. for they can go visit this place in Burlington. The story of this great American Revolutionary fighter. Or reach out to our TCHS Brother Algernon Ward Jr.who does a lot of historical reenactments. This patriot served with General George Washington and was on the boat that crossed the Delaware River on that cold Christmas night to take the City of Trenton back from the “Red Coats” hands. Enjoy!

Remember – “No one battle or war will give all negro’s their freedom but if we start now to show that we are Americans, I know that day will come.” – Oliver Cromwell

Oliver Cromwell, soldier in the Revolutionary War, receives an honorable discharge and the Badge of Merit from George Washington.

Oliver Cromwell was no ordinary soldier of the American Revolution. This military hero’s discharge was signed by General George Washington “stating that he was entitled to wear the badges of honor by reason of his honorable services.”

Cromwell’s story first appeared in a newspaper interview conducted when he was 100 years old by a reporter of the Burlington Gazette (Burlington, New Jersey) in 1905, which was reprinted by the Trenton Evening Times. As the newspaper article noted: “though feeble, his lips trembling at every word, when he spoke of [General George] Washington his eyes sparkled with enthusiasm.”

The archive of old newspapers in GenealogyBank is packed with thousands of these firsthand accounts of military service in the Revolutionary War, adding a personal touch to the facts of many of these early American military battles.

In that 1905 interview, Cromwell told of his Revolutionary War service crossing the Delaware “with his beloved commander…on the memorable Christmas night [in] 1776.”

The old newspaper article adds that Cromwell: “took part in the battle of Trenton, and helped to ‘knock the British about lively at Princeton.’ He also fought at the Revolutionary War battles of Short Hills, Brandywine, Monmouth and Springfield, where he was severely wounded, and saw the last man killed at York town.”

A few days after Cromwell’s death, the local Burlington Gazette published an editorial calling for the erection of a monument in honor of the Revolutionary War hero.

“And thus, one by one, the men who purchased with their blood the liberty we now enjoy, are going off the stage…We suggest whether it would not be proper to erect some suitable monument over his grave…it will be pleasant to know that the people of Burlington felt sufficient interest in him, to mark the spot where his ashes are buried.”

The reprint in the Trenton Evening Times notes: “Unfortunately no such monument was ever erected and there is nothing to indicate the last resting place of Oliver Cromwell.”

Oliver Cromwell lived in a different time and place, and life was more difficult than it would have been for him now. He was African American, one of the many that served in the American Revolution. Though honored by General Washington, his pension was revoked by a local pension agent. “Tears fell from his eyes when he told of his discharge being taken from him by the pension agent.”

In 1984, a plaque was placed on the property where his home once stood.His grave has been located in the cemetery at Broad Street Methodist Church in Burlington, New Jersey. The local historical society was named in his honor in 1983.

Oliver Cromwell (1752-1853), one of “the men who purchased with their blood the liberty we now enjoy,” was “respected by our citizens” then and remembered to this day. Research more about the blacks who fought in the American Revolution and share wit your babies. Make it a champion day!