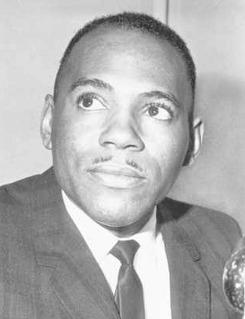 GM – FBF – I have not forgotten about “The greatest generation” and how they gave their lives on this day in Normandy, France. Our generation still delt with a war in our streets from wanting to be free to get an education and vote. This story below – We should never Forget!

Remember – ” If I can’t walk in America, down her streets from stste to state something is wrong with this we call America” – James Meredith

One sweltering morning in June 1966, James Meredith set out from Memphis with an African walking stick in one hand, a Bible in the other and a singular mission in mind. The 32-year-old Air Force veteran and Columbia University law student planned to march 220 miles to the Mississippi state capital of Jackson, to prove that a black man could walk free in the South. The Voting Rights Act had been passed only the year before, and his goal was to inspire African-Americans to register and go to the polls. “I was at war against fear,” he recalls. “I was fighting for full citizenship for me and my kind.”

It wasn’t the first time Meredith had charged into hostile territory all but alone. Four years earlier, he’d become the first black person to enroll at the University of Mississippi, in Oxford, despite vehement protests from Gov. Ross Barnett and campus riots that left 2 people dead and more than 160 wounded, including dozens of federal marshals. When Meredith graduated from Ole Miss in 1963, he wore a segregationist’s “Never” button upside down on his black gown.

On the second day of his self-described “walk against fear,” a handful of reporters, photographers and law enforcement officials awaited his arrival in the late afternoon heat near Hernando, Mississippi. Jack Thornell, a 26-year-old cub photographer for the Associated Press in New Orleans, was sitting in a parked car along with a colleague from arch-rival United Press International, waiting for a Life photographer to bring them Cokes, when Meredith and a few followers came into view.

All of a sudden, a man started shouting, “I just want James Meredith!” Shotgun blasts rang out across the highway, striking Meredith in the head, neck, back and legs. Thornell jumped out of the vehicle and started clicking away, taking two rolls of pictures with his pair of cameras. He then drove back to Memphis in a panic, convinced he would be fired for failing to photograph both the assailant and the victim. Meanwhile, minutes passed before an ambulance reached Meredith, who lay in the road alone. “Isn’t anyone going to help me?” he remembers shouting.

Of the many photographs that Thornell made of the incident, one shows the fallen man on dusty Highway 51 screaming in agony. It was published in newspapers and magazines nationwide and went on to win a Pulitzer Prize. The image suggests the very pain and frustration of being black in the Deep South of the 1960s. “When people saw scenes like this in newspapers and on TV—when they saw what was actually happening down South—they couldn’t believe it,” says Thornell, who is 65 and retired and lives in Metairie, Louisiana. He says his one lasting regret about that day four decades ago is that he didn’t put his camera down to help the wounded Meredith.

As it happens, Thornell took one picture of the incident in which the gunman can be seen. But it wasn’t needed for evidence. An unemployed hardware clerk from Memphis named Aubrey James Norvell was apprehended at the scene of the shooting and pleaded guilty before the case went to trial. He served 18 months of a five-year prison sentence, then all but dropped out of sight. Now 79, Norvell lives in Memphis. He declined to discuss the past.

After Meredith was shot, civil rights leaders gathered in his hospital room, among them Martin Luther King Jr., Stokely Carmichael and Floyd McKissick. The civil rights movement had lately been strained by internal dissent, with leaders such as King calling for nonviolence and integration and others such as Carmichael promoting a more radical black power stance. But for now the leaders put aside their differences to carry on Meredith’s pilgrimage.

While Meredith recuperated from his wounds, scores of people gathered in Hernando to resume what was now called the “Meredith March.” Led by King, Carmichael and McKissick, the marchers walked for nearly three weeks, helping to register thousands of African-American voters along the way. Meredith himself rejoined the pilgrimage on June 26, its final day, as some 12,000 triumphant protesters entered Jackson surrounded by cheering crowds. Looking back, he says he was inspired by people on both sides of the color divide. “You can’t forget that whites in the South were as unfree as any black,” he explains. “White supremacy was official and legal—it was enforced by judges and the law people—and a white that failed to acknowledge and carry out the mandate of white supremacy was as subject to persecution as any black.”

Meredith would graduate from Columbia law school, run (unsuccessfully) for Congress in New York and Mississippi, and work as a stockbroker, professor and writer. Then, in the late 1980s, the former civil rights icon shocked many admirers when he joined the staff of the ultraconservative North Carolina senator Jesse Helms and endorsed former Ku Klux Klan leader David Duke’s campaign to become governor of Louisiana. Meredith, still fiery at 71, defends those choices, saying he was “monitoring the enemy.” Married with five children and five grandchildren, Meredith lives in Jackson and still occasionally addresses groups on civil rights issues.

“He helped make significant strides in the overall struggle for civil and human rights, and none of that is diminished by what happened later,” says Horace Huntley, director of the Oral History Project at the Birmingham Civil Rights Institute, in Alabama. “Those accomplishments are etched in stone.”