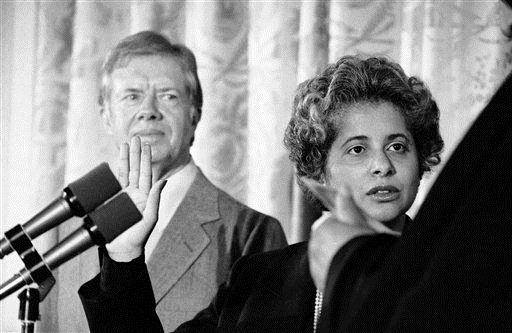 GM – FBF – Today I will share with you a person who has broken the glass ceiling in everything that she had faced. Women are rising in the political process.Patricia Roberts Harris, the first African American U.S. Ambassador is named permanent chairman of the Democratic National Convention. She will later be appointed Secretary of Health and Human Services and Secretary of Housing and Urban development. June 27, 1972 Enjoy!

Temember – “Senator, I am one of them. You do not seem to understand who I am. I am a black woman, the daughter of a dining-car worker … If my life has any meaning at all, it is that those who start out as outcasts can wind up as being part of the system.” – Patricia Roberts Harris.

Patricia Roberts Harris (May 31, 1924 – March 23, 1985) served in the American administration of President Jimmy Carter as United States Secretary of Housing and Urban Development, and United States Secretary of Health, Education, and Welfare (which was renamed the Secretary of Health and Human Services during her tenure). She was the first African American woman to serve in the United States Cabinet, and the first to enter the line of succession to the Presidency. She previously served as United States Ambassador to Luxembourg under President Lyndon B. Johnson, and was the first African-American woman to represent the United States as an ambassador.
In 1971, Harris was named to the board of directors of IBM. In addition she served on the boards of Scott Paper Co. and Chase Manhattan Bank.

She continued making an impact on the Democratic Party when, in 1972, she was appointed chairman of the credentials committee and a member-at-large of the Democratic National Committee in 1973. A testimony to her effectiveness and her commitment to excellence came when President Jimmy Carter appointed her to two cabinet-level posts during his administration.

Harris was appointed to the cabinet of President Jimmy Carter when he took office in 1977. At her confirmation hearing, Senator William Proxmire questioned whether Harris came from a background of too much wealth and power to be an effective Secretary of Housing and Urban Development. Harris responded “I am a black woman, the daughter of a Pullman (railroad) car waiter. I am a black woman who even eight years ago could not buy a house in parts of the District of Columbia. I didn’t start out as a member of a prestigious law firm, but as a woman who needed a scholarship to go to school. If you think I have forgotten that, you are wrong.” Once confirmed, Harris became the first African American woman to enter the Presidential line of succession, at number 13. Between 1977 and 1979 she served as Secretary of Housing and Urban Development (HUD), and in 1979, she became Secretary of Health, Education, and Welfare, the largest Cabinet agency.

After the Department of Education Organization Act came into force on May 4, 1980, the educations functions of the Department of Health, Education and Welfare were transferred to the Department of Education. Harris remained as Secretary of the renamed Department of Health and Human Services until Carter left office in 1981. Because the department had merely changed names, as opposed to disbanding with new department being created, she did not face Senate confirmation again after the change.
Harris unsuccessfully ran for Mayor of Washington, D.C. in 1982, losing the September 14 primary election to incumbent mayor Marion Barry .That year, she was appointed a full-time professor at the George Washington National Law Center.In 1967, Lord Snowdon photographed Harris for Vogue at the United Nations. In her spare time, Harris enjoyed cooking and baking.

Patricia married William Beasley Harris in 1955 after only three months of dating. Her husband William died in November of 1984. She died of breast cancer at age 60 on March 23, 1985. She was interred at the Rock Creek Cemetery in Washington, D.C.

Patricia Roberts Harris, the first African American U.S. Ambassador is named permanent chairman of the Democratic National Convention. She will later be appointed Secretary of Health and Human Services and Secretary of Housing and Urban development. June 27, 1972. Research more about women in politic in real time and share with your babies. Make it a champion day!