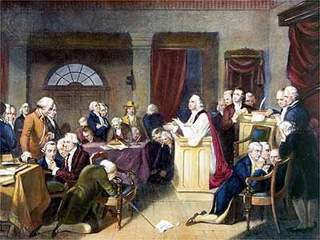 GM – FBF – Today, I want talk about a Congressional law which kept African slaves in check. When if fact, slavery was officially barred from the new western states in 1787. In fact it did not happen in this case or in later years, The Louisana Purchase also did nothing for the Africans. Don’t forget the Dread Scott case that went to The Supreme Court.
Enjoy and learn!

Remember – If we give them (Slaves) an opportunity to be part of America, it will strive forward for another 100 years. – Thomas Jefferson

Today in our History – July13, 1787 – The Northwest Ordinance, passed. Incorporating the Western Territories.

Under the Treaty of Paris (1783) which ended the Revolutionary War, Britain relinquished to the United States a large tract of land west of the Appalachian mountains, doubling the size of the new nation. How would this territory be incorporated into the United States? Congressional debates about the division and government of the new territories resulted in precedents which were followed throughout the settlement of the west.

In 1783, Congress formed a committee to “prepare a plan for the temporary government of the western territory.” Thomas Jefferson, chairman of the committee, delivered a report in March 1784 proposing the division of the land into ten territories, and their eventual admission to the Union on an equal footing with the original thirteen states. In addition, Jefferson proposed the prohibition of slavery in any of the new states. Congress rejected Jefferson’s ban on slavery, but in 1785 Rufus King attempted to restore it, offering the displayed resolution. Congress, once again, rejected the proposal by a slight margin. Slavery was officially barred from the new western states in 1787.

Congress Decides How to Divide the Western Territories
[Detail] An ordinance for ascertaining the mode of disposing of lands in the Western Territory. New York : s.n., 1785. LC copy annotated by Rufus King and by an unknown hand, with some changes reflected in the ordinance passed May 20 (cf. JCC 477). Library of Congress, Rare Book and Special Collections Division.

Congressman David Howell of Rhode Island complained that America’s new western territories were “the most complicated and embarrassing Subject before Congress since peace has taken place.” Deliberation over what to do with the territory continued for several years, but on May 18, 1785, a burst of activity resulted in a proposal for the orderly settlement of the western public lands. Rufus King of Massachusetts, a key figure in the debate, made many of the notations that appear in the document’s margins. Congress adopted the final version of the Land Ordinance of 1785 on May 20.

Congress Determines How New States Can Enter the Union
In 1787, Congress was approached by agents of the Ohio Company, a group of New England Revolutionary War veterans seeking to purchase vast tracts of western land. The prospect of earning real revenue for the western territories inspired Congress to resolve the long debate over the west; the Northwest Ordinance, passed on July 13, 1787, provided for a government in the western territories, created a procedure for the formation of states, established a formal method for the new states to enter the union as equals, guaranteed the inhabitants civil and religious liberties, and prohibited slavery. The president of Congress, Arthur St. Clair, was named first governor of the territory. Research more about this Territorel event and others which held Balec people and share with your babies. Make it a champon Day!