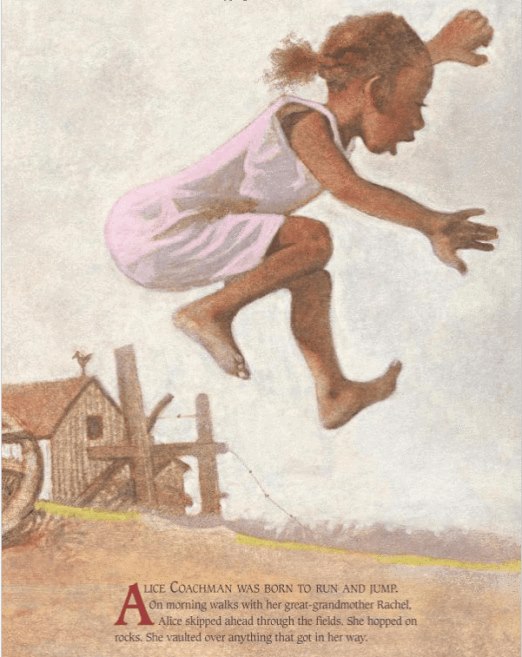 GM – FBF – Today, I want to share with you one of the saddest sports stories in Track and Field that I have ever heard. I thought that sprinter Jesse Owens racing a horse at Monmouth, NJ Racetrack and other tracks around the states just to feed his family was sad but go anyplace and people will tell you Wilma Rudolph was the first black woman to win a medal — it’s not true, Rudolph’s three gold medals in the sprints at the Rome Olympics in 1960, was 12 years later than Coachman but Rudolph was on television. Alice Coachman was not. Enjoy!

Remember – “I had accomplished what I wanted to do, It was time for me to start looking for a husband. That was the climax. I won the gold medal. I proved to my mother, my father, my coach and everybody else that I had gone to the end of my rope.” – Alice Coachman

Alice Coachman became the first African American woman from any country to win an Olympic Gold Medal when she competed at the 1948 Summer Olympics in London, UK.

Born November 9, 1923, in Albany, Georgia, to Evelyn and Fred Coachman, Alice was the fifth of ten children. As an athletic child of the Jim Crow South, who was denied access to regular training facilities, Coachman trained by running on dirt roads and creating her own hurdles to practice jumping.
Even though Alice Coachman parents did not support her interest in athletics, she was encouraged by Cora Bailey, her fifth grade teacher at Monroe Street Elementary School, and her aunt, Carrie Spry, to develop her talents.

After demonstrating her skills on the track at Madison High School, Tuskegee Institute offered sixteen-year-old Coachman a scholarship to attend its high school program. She competed on and against all-black teams throughout the segregated South.

In 1943, Coachman entered the Tuskegee Institute college division to study dressmaking. She played on the basketball team and ran track-and-field, where she won four national championships for events in sprinting and high jumping. Coachman completed a degree in dressmaking in 1946. In 1947, Coachman enrolled in Albany State College (now University) to continue her education. Coachman completed a B.S. degree in Home Economics with a minor in science at Albany State College in 1949 and became teacher and track-and-field instructor.

During World War II, the Olympic committee cancelled the 1940 and 1944 games. Alice Coachman’s first Olympic opportunity came in 1948 in London, when she was twenty-four. On August 8, 1948, Alice Coachman leapt 5 feet 6 1/8 inches to set a new Olympic record and win a gold medal for the high jump.

Coachman (who was later known as Alice Coachman Davis) received her medal from King George VI. She was invited aboard a British Royal yacht, she was congratulated by President Harry S. Truman at the White House, and Count Basie gave a party for her. She was lauded in a motorcade that wound its way through Georgia from Atlanta to her hometown, Albany.

But she had returned to a segregated South. Blacks and whites were seated separately in the Albany city auditorium when she was honored there. The mayor sat on the stage with her but would not shake her hand, and she had to leave by a side door.

As a youngster in Albany, she had run and jumped barefoot, using ropes and sticks for makeshift high jumps. She had not been allowed to train at athletic fields with whites.

“You had to run up and down the red roads and the dirt roads,” Coachman told The Kansas City Star. “You went out there in the fields, where there was a lot of grass and no track. No nothing.”

At a time when there were few high-profile black athletes beyond Jackie Robinson and Joe Louis, Coachman became a pioneer. She led the way for female African-American Olympic track stars like Wilma Rudolph, Evelyn Ashford, Florence Griffith Joyner and Jackie Joyner-Kersee.

“I made a difference among the blacks, being one of the leaders,” she told The New York Times in 1996. “If I had gone to the Games and failed, there wouldn’t be anyone to follow in my footsteps. It encouraged the rest of the women to work harder and fight harder.”

During her career, she won thirty-four national titles, ten for the high jump in consecutive years. Alice Coachman was inducted into nine halls of fame including the National Track-and-Field Hall of Fame (1975) and the U.S. Olympic Hall of Fame (2004). Coachman became the first black woman to endorse an international product when Coca-Cola signed her as a spokesperson in 1952.

Coachman married Frank A. Davis and is the mother of two children. She taught for the later part of her life at South Carolina State College, Albany State University and the Job Corps. The Alice Coachman Elementary School in Albany, Georgia is named in her honor.

In 1994, she founded the Alice Coachman Track and Field Foundation to provide assistance to young athletes and former Olympic competitors. Coachman died in Albany, Georgia on July 14, 2014. She was 90.

Albany is located in Southwest Georgia closer to the Florida border and further away from the capitol city of Atlanta, GA where Dr. Martin L. King – Lost “The Albany Movement ” a desegregation campaign formed on November 17, 1961. Almost all of Albany’s public facilities remained segregated after King’s departure, making the Albany Movement one of the few failures among the 1960s civil rights campaigns. Research more about black female track athletes and share with your babies. Make it a champion day!