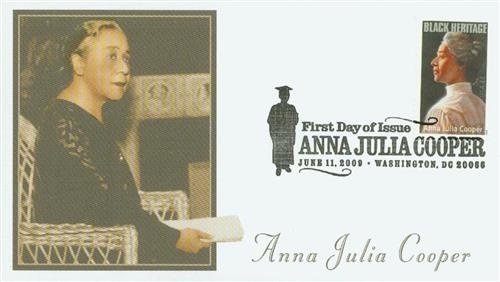 GM – FBF – It is not the intelligent woman v. the ignorant woman; nor the white woman v. the black, the brown, and the red, it is not even the cause of woman v. man. Nay, tis woman’s strongest vindication for speaking that the world needs to hear her voice. – Anna Julia Cooper

Remember – The old, subjective, stagnant, indolent and wretched life for woman has gone. She has as many resources as men, as many activities beckon her on. As large possibilities swell and inspire her heart. – Anna Julia Cooper

Anna Julia Cooper was born in Raleigh, North Carolina on August 10, 1858. Cooper was the eldest of two daughters born to an enslaved black woman, Hannah Stanley and her white master George Washington Haywood (Rashidi, 2002). According to Rashidi (2002) “Cooper possessed an unrelenting passion for learning and a sincere conviction that black women were equipped to follow intellectual pursuits (on-line).” This was a claim that seemed reasonable, because at the age of seven, Cooper was accepted into a teacher’s training program at St. Augustine’s Normal School and Collegiate Institute, a placement that required prior academic training (Biography Resource Center, 2001 (BRC), 2001).
Cooper eventually graduated to the teachers level and married George C. Cooper who was also a former slave in, 1877. She was forced to leave her teaching position because of her marriage, which was quite an unfortunate situation because her husband died two years later (BRC, 2001). Cooper never remarried.

Although she was born into slavery she had no recollection of the events of her slavery as a child, but she does recall events from the civil war as well as the earlier stages or the feminist movement. Cooper declared herself “the voice of the South (BRC, 2001, on-line, extracted 10/30/2002),”because during the “fledging” of the feminist movement, it all but ignored minority women. According to the BRC (2001) when Cooper’s first book “A Voice from the South by a Black Woman of the South” was released to the public, it was declared the first work of an African-American feminist.

Cooper died of an heart attack on February 27, 1964 at the age of 105 in Washington, D.C. (BRC, 2001). She lived an eventful life that lead her from the belly of slavery to the dawn of the civil rights movement lead by Dr. Martin Luther King Jr. and other prominent black leaders of the time. Cooper wrote two additional book from the one mentioned earlier, “L’Attitude de la France a l’Egard de l’Esclavage pendant la Revolution” and “Le Pelerinage de Charlemagne: Voyage a Jerusalem et a Constantinople.”

Cooper’s life is one that exemplifies an individual committed to social change and anyone’s ability to overcome the obstacles of sexism and or racism and this is why her work as a “scholar, educator, and activist is evidence of the tremendous energy demanded of those who wanted to create change in the black community during the tumultuous period in which she lived” – Research more about this proud America hero and share with your babies. Make it a champion day!