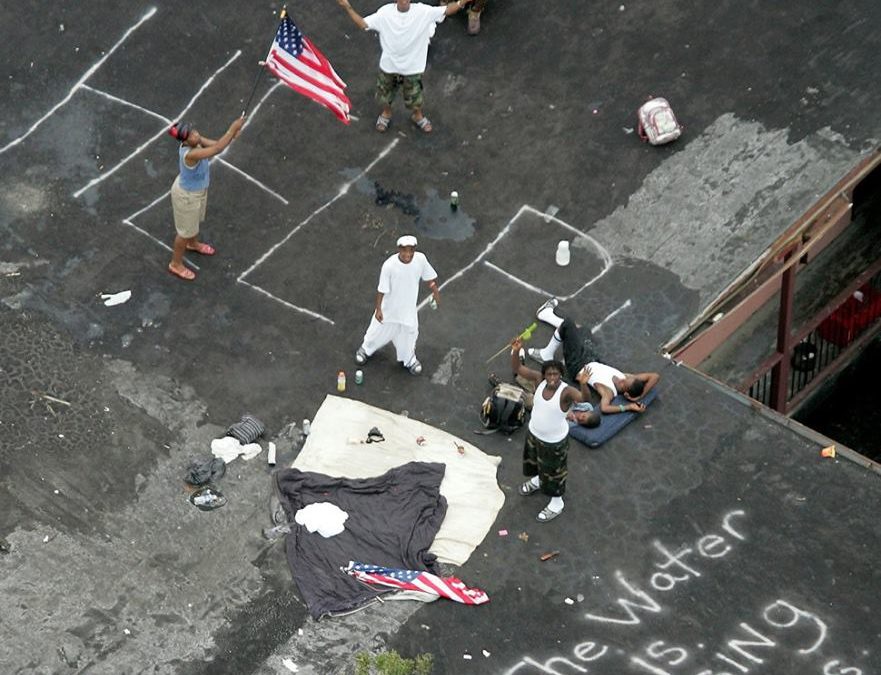 GM – FBF – Today’s story is about a disaster, people who live in different parts of the country are going to expect this and move on with their lives. One day in our nation’s southern states came something that no one was expecting. Even though they were warned to leave well before the devastation hit but many of our people could not leave if the wanted to and this is what happened.

Remember – “They see us screaming for help but it was slow in coming. I have six children and no transportation. I ‘m not going anywhere.” – Hurricane Katria victim

Today in our History – August 29, 2005 – Early in the morning on August 29, 2005, Hurricane Katrina struck the Gulf Coast of the United States. When the storm made landfall, it had a Category 3 rating on the Saffir-Simpson Hurricane Scale–it brought sustained winds of 100–140 miles per hour–and stretched some 400 miles across. The storm itself did a great deal of damage, but its aftermath was catastrophic. Levee breaches led to massive flooding, and many people charged that the federal government was slow to meet the needs of the people affected by the storm. Hundreds of thousands of people in Louisiana, Mississippi and Alabama were displaced from their homes, and experts estimate that Katrina caused more than $100 billion in damage.

The tropical depression that became Hurricane Katrina formed over the Bahamas on August 23, 2005, and meteorologists were soon able to warn people in the Gulf Coast states that a major storm was on its way. By August 28, evacuations were underway across the region. That day, the National Weather Service predicted that after the storm hit, “most of the [Gulf Coast] area will be uninhabitable for weeks…perhaps longer.”

During the past century, hurricanes have flooded New Orleans six times: in 1915, 1940, 1947, 1965, 1969 and 2005.
New Orleans was at particular risk. Though about half the city actually lies above sea level, its average elevation is about six feet below sea level–and it is completely surrounded by water. Over the course of the 20th century, the Army Corps of Engineers had built a system of levees and seawalls to keep the city from flooding. The levees along the Mississippi River were strong and sturdy, but the ones built to hold back Lake Pontchartrain, Lake Borgne and the waterlogged swamps and marshes to the city’s east and west were much less reliable. Before the storm, officials worried that surge could overtop some levees and cause short-term flooding, but no one predicted levees might collapse below design height. Neighborhoods that sat below sea level, many of which housed the city’s poorest and most vulnerable people, were at great risk of flooding.

The day before Katrina hit, New Orleans Mayor Ray Nagin issued the city’s first-ever mandatory evacuation order. He also declared that the Superdome, a stadium located on relatively high ground near downtown, would serve as a “shelter of last resort” for people who could not leave the city. (For example, some 112,000 of New Orleans’ nearly 500,000 people did not have access to a car.) By nightfall, almost 80 percent of the city’s population had evacuated. Some 10,000 had sought shelter in the Superdome, while tens of thousands of others chose to wait out the storm at home.

By the time Hurricane Katrina struck New Orleans early in the morning on Monday, August 29, it had already been raining heavily for hours. When the storm surge (as high as 9 meters in some places) arrived, it overwhelmed many of the city’s unstable levees and drainage canals. Water seeped through the soil underneath some levees and swept others away altogether. By 9 a.m., low-lying places like St. Bernard Parish and the Ninth Ward were under so much water that people had to scramble to attics and rooftops for safety. Eventually, nearly 80 percent of the city was under some quantity of water.

Many people acted heroically in the aftermath of Hurricane Katrina. The Coast Guard, for instance, rescued some 34,000 people in New Orleans alone, and many ordinary citizens commandeered boats, offered food and shelter, and did whatever else they could to help their neighbors. Yet the government–particularly the federal government–seemed unprepared for the disaster. The Federal Emergency Management Agency (FEMA) took days to establish operations in New Orleans, and even then did not seem to have a sound plan of action. Officials, even including President George W. Bush, seemed unaware of just how bad things were in New Orleans and elsewhere: how many people were stranded or missing; how many homes and businesses had been damaged; how much food, water and aid was needed. Katrina had left in her wake what one reporter called a “total disaster zone” where people were “getting absolutely desperate.”

(For one thing, many had nowhere to go. At the Superdome in New Orleans, where supplies had been limited to begin with, officials accepted 15,000 more refugees from the storm on Monday before locking the doors. City leaders had no real plan for anyone else. Tens of thousands of people desperate for food, water and shelter broke into the Ernest N. Morial Convention Center complex, but they found nothing there but chaos. Meanwhile, it was nearly impossible to leave New Orleans: Poor people especially, without cars or anyplace else to go, were stuck. For instance, some people tried to walk over the Crescent City Connector bridge to the nearby suburb of Gretna, but police officers with shotguns forced them to turn back.)

Katrina pummeled huge parts of Louisiana, Mississippi and Alabama, but the desperation was most concentrated in New Orleans. Before the storm, the city’s population was mostly black (about 67 percent); moreover, nearly 30 percent of its people lived in poverty. Katrina exacerbated these conditions, and left many of New Orleans’s poorest citizens even more vulnerable than they had been before the storm.

In all, Hurricane Katrina killed nearly 2,000 people and affected some 90,000 square miles of the United States. Hundreds of thousands of evacuees scattered far and wide. Today, after years of recovery and rebuilding efforts, people along the Gulf Coast have made great strides in returning to life as usual even as they continue to rebuild. Research more about American disasters and share with your babies. Make it a champion day!