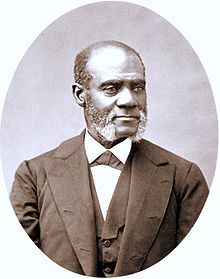 GM – FBF – This has been a busy week for me and I am sorry that I haven’t had time to respond to your posts. I will on the weekend. Today I want to share with you a story about one of the most forgotten men when it comes to leaders speaking of Black freedom during the 1800’s. David Walker you should know just like Nate Turner,s Gabriel Prosser,Denmark Vesey and Fredrick Douglass. All great men of their time who spoke truth to power. I want to share with you a man who you may have never heard of and before the Civil War he preached and spoke about freedom. Enjoy!

Remember – “I had better die freemen, than live to be slaves. Let your motto be reisstance!” – Henry Highland Garnet

Today in our History – August 30, 1843 The National Negro Convention meets in Buffalo, New York. The African American abolitionist and activist Henry Highland Garnet (1815-1882) was a religious man. And on this day, he was raising Hell.
Garnet was all of 27 years old when, in August of 1843, he addressed the National Negro Convention in Buffalo, New York. The meeting was part of the decades long National Negro Convention Movement, in which northern free blacks met to discuss strategies for achieving racial equality and civil rights for freemen in the North, and emancipation and liberty for enslaved blacks in the South. These discussions often centered on the benefits of using “moral suasion versus political action” – that is, whether or not blacks and whites should use moral persuasion to convince American society to end racial prejudice, or, engage in direct political action to gain liberty and equality for people of African descent. (The influential white abolitionist William Lloyd Garrison was among those who eschewed political activism.)

Garnet had a much more radical approach to the problems of those in bondage. The son of a fugitive slave (one source indicates his grandfather was a Mandingo warrior prince), the youthful Garnet and his family were always fearful of being taken by slave catchers; his father once made a narrow escape from slave hunters, and his sister was taken into slavery for a time. His life experiences may have made him more open to solutions that went beyond suasion and politics, because in August of 1843, Garnet was openly calling for a slave rebellion.

Garnet’s speech was not just some angry rant. He grew up in New York City, with acquaintances such as Alexander Crummell, Samuel Ringgold Ward, James McCune Smith, Ira Aldridge, and Charles Reason, men who are among a who’s who of early 19th century northern black leaders. He attended a free school in New York, and sailed on ships to Cuba as a cabin boy. He had theological training and served as a Presbyterian pastor. Garnet was educated and worldly, and his speech reflected that, with references to pride in African heritage, slavery policy in the colonial and Revolutionary War eras, and the global context of abolitionism. This was in addition to his speech’s major themes that slavery was anti-Christian, and resistance to slavery pro-Christian; and that manhood and honor dictated that (male) slaves use “every means” necessary to liberate themselves.

It’s probably too much to say that in tone, Garnet sounded to his contemporaries like Malcolm X did to his. But Garnet’s righteous and religious anger, and his open call for manhood-based armed resistance, was surely uncomfortable to the more pacifist natures of current day black and white abolitionists. Fellow convention attendee Frederick Douglass, who was associated with William Lloyd Garrison, made a rebuttal to Garnet’s speech; unfortunately, Douglass’ speech did not survive for us to read it today.

His words may be Garnet’s lasting legacy. It is believed that Garnet’s “Call to Rebellion” helped inspire others in the abolitionist movement to take action, including John Brown who led the 1859 attack on the arsenal in Harpers Ferry, Virginia (now West Virginia).

There is an abridged version of Garnet’s speech to the 1843 National Negro Convention, which is often referred to as his “Address to the Slaves”. Please research it and share with your babies. Make it a champion day!