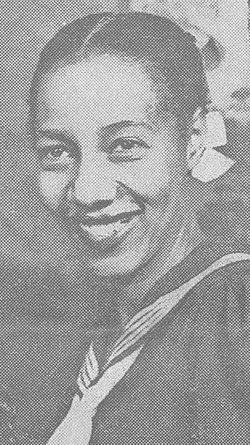 GM – FBF – Today’s story is about a family and their singing prowess, the heart and soul of the group was the most business minded and let her other sister’s gain most of the fame. Indianapolis, Indiana is where they planted their roots but they were sellers in Cincinnati, Ohio, Carnegie Hall and The Apollo Theater. Enjoy!

Remember – “Dad was a self-taught musician as well as a self-taught artist”, recalled Aletra. He was responsible for the whole thing. He taught everybody;from the age of three, they all played instruments. “He was the leader of the band for a while, but Dad got tired” – Aletra Hampton

Aletra Hampton (October 8, 1915 – November 12, 2007) was an American jazz pianist and singer, best known for her performances during the 1940s and 1950s as a member of the Hampton family band and the Hampton Sisters, a quartet she formed during World War II with her siblings, Carmalita, Virtue and Dawn. The Middletown, Ohio, native began performing at a young age and moved with her family to Indianapolis, Indiana, in 1938.

Hampton and her eight siblings performed in the 1940s and 1950s in Duke Hampton’s band, their oldest
brother’s jazz orchestra. The group became well known as the house band at nightclubs in Indianapolis and Cincinnati, Ohio, and toured the United States playing at venues that included New York City’s Carnegie Hall and Harlem’s Apollo Theater and the Savoy Ballroom. The family’s band dissolved in the 1950s, but Hampton and two of her sisters, Virtue and Carmalita, continued to perform as the Hampton Sisters for several more years. The trio reunited in Indianapolis in 1981 after almost a twenty-year hiatus. Hampton and her sister, Virtue, continued to perform as a duo, mostly in Indianapolis, until 2006.

Hampton and her siblings received Indiana’s Governor Arts Award (1991) for their contributions to the state’s musical heritage. In addition, Hampton was inducted into the Indianapolis Jazz Foundation’s Hall of Fame (1999); received an honorary doctorate of music degree from the University of Indianapolis(2004); and was a recipient of NUVO newspaper’s Cultural Vision Lifetime Achievement Award (2006).

The Indiana Historical Society released The Hampton Sisters, A Jazz Tribute (2003), a compact disc featuring Aletra and Virtue Hampton. Close members of Hampton’s musical family include her brother, “Slide” Hampton, a National Endowment for the Arts Jazz Master; her sister, Dawn (Died in 2016), a well-known New York City cabaret singer and swing dancer; and her nephew, Pharez Whitted, a jazz trumpeter. Research more about family entertainment groups and share with your babies. Make it a champion day!