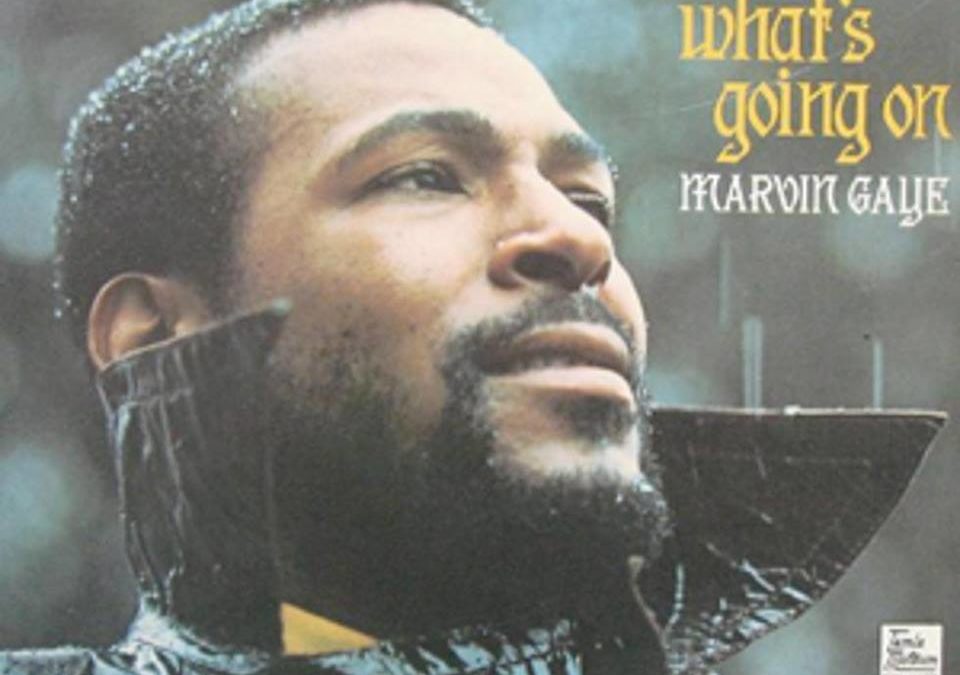 GM – FBF – Today’s story is about a song by one of the greatest singers in America. He had hits galore and was the darling of the record company that he worked for. The album that the song came from was a platinum album that the record company put on the shelf because of the current tide in the country and was afraid that their buyers might not understand. The Album and particularly this song stood out for political activist and was sampled and remade by over 100 artists. Enjoy!

“Inner City Blues (Make Me Wanna Holler)”, often shortened to “Inner City Blues”, is a song by Marvin Gaye, released as the third and final single from and the climactic song of his 1971 landmark album, What’s Going On. Written by Gaye and James Nyx Jr., the song depicts the ghettos and bleak economic situations of inner-city America, and the emotional effects these have on inhabitants.

In 1998, co-writer James Nyx Jr. recalled, “Marvin had a good tune, sort of blues-like, but didn’t have any words for it. We started putting some stuff in there about how rough things were around town. We laughed about putting lyrics in about high taxes, ’cause both of us owed a lot. And we talked about how the government would send guys to the moon, but not help folks in the ghetto. But we still didn’t have a name, or really a good idea of the song. Then, I was home reading the paper one morning, and saw a headline that said something about the ‘inner city’ of Detroit. And I said, ‘Damn, that’s it. ‘Inner City Blues.’ “

The song was recorded in a mellow funk style with Gaye playing piano. Several of the Funk Brothers also contributed, including Eddie “Bongo” Brown, and bassist Bob Babbitt.
In its unedited version as it appears on the album, the final minute of the song (and of the LP) is a reprise to the theme of “What’s Going On”, the album’s first song, then segues into a dark ending. This final minute was cut off of the single version, as well as other sections of the song so the single edit runs under three minutes—this edit appears on subsequent reissues of the Motown released “Inner City Blues” as a single on their Tamla label on March 14, 1971.

The song helped Gaye make history by being one of the few artists to have three or more Top 10 songs off Billboard’s Pop Singles chart peaking at #9 and one of the first to have three consecutive #1 hits on Billboard’s R&B Singles chart where it stayed for two weeks.[2] Although not certified by the RIA at that time, all three releases from the What’s Going On album gained Gold status by selling over 1,000,000 copies in the United States.

A music video for the song was not released until 1994, when the Hughes brothers co-directed a video of the song for the reissue of What’s Going On. The video was shot in Harlem over the course of five days, featuring visuals of poverty and inner-city depression. The brothers also filmed firefighters putting out a fire, claiming to police to have been shooting a documentary.

The song was first covered by the Belgian jazz band Placebo on the Ball of Eyes LP in 1971. Then by Grover Washington, Jr. in 1972 from the album named “Inner City Blues.” Also in 1972, on her album A Time In My Life, Sarah Vaughan covered “Inner City Blues” with David Axelrod on the drums.

The same year the song was recorded by The Chi-Lites on the album A Lonely Man, and by The Impressions for their album Times Have Changed. It was covered by Phil Upchurch in his album, “Darkness, Darkness” Christian alternative band Adam Again did a soulful rendition of the song on 1990s Homeboys.

In 1993, guitarist Larry Coryell covered the song from his album “Fallen Angel.” In 1994, Angela Winbush covered the song and released it as a single and abbreviated the name simply to “Inner City Blues”. 1996 saw R&B group Ideal release a cover of the song on the Original Gangstas soundtrack. In 1998, the Mayfield Four released a cover of “Inner City Blues (Make Me Wanna Holler)” under its original title on their debut album Fallout. The Dirty Dozen Brass Band also did a cover of this song on their album, What’s Going On (2006) (Shout Factory). It was also covered by Joe Cocker on his album titled “Cocker”.

Etta James covered hers for her 1998 album Life, Love & the Blues.

It was also covered by the hard-rock band Sevendust in 2003, and can be found on the DVD included with some versions of their album Seasons, and then was included on their compilation album Best of (Chapter One 1997-2004) which was released in late 2005. In 2004, John Mayer performed the song live and later released on his compilation live album As/Is. The version includes a turntable solo by New York City jazz turntable player DJ Logic.

The original version of the song also was used in the soundtrack of the 2007 film Zodiac, directed by David Fincher in a time lapse scene of the Transamerica Pyramid being built. It was also featured in the 2008 video game Grand Theft Auto IV on The Vibe, an in-game radio station. And it was also featured in the opening scene of 2014 film A Most Violent Year, directed by J.C. Chandor. Research more about Marvin Gaye and share with your babies. Make it a champion day!