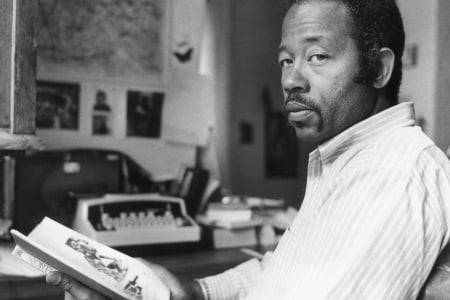 GM – FBF – Today’s American Champion was an American writer, and political activist who became an early leader of the Black Panther Party. In 1968, he wrote Soul on Ice, a collection of essays that, at the time of its publication, was praised by The New York Times Book Review as “brilliant and revealing”. He stated in Soul on Ice: “If a man like Malcolm X could change and repudiate racism, if I myself and other former Muslims can change, if young whites can change, then there is hope for America.” He went on to become a prominent member of the Black Panthers, having the titles Minister of Information and Head of the International Section of the Panthers, while a fugitive from the United States criminal justice system in Cuba and Algeria. He became a fugitive after leading an ambush on Oakland police officers, during which two officers were wounded. He was also wounded during the clash and Black Panther member Bobby Hutton was killed. As editor of the official Panthers’ newspaper, The Black Panther, his influence on the direction of the Party was rivaled only by founders Huey P. Newton and Bobby Seale. He and Newton eventually fell out with each other, resulting in a split that weakened the party. After spending seven years in exile in Cuba, Algeria, and France, he returned to the US in 1975, where he became involved in various religious groups (Unification Church and CARP) before finally joining the Church of Jesus Christ of Latter-day Saints, as well as becoming a conservative Republican, appearing at Republican events.Today in our History – November 24, 1968 – Leroy Eldridge Cleaver (August 31, 1935 – May 1, 1998) – fled the U.S. for Algeria to avoid imprisonment on a parole violation.Eldridge Cleaver spent much of his youth in reform school and prisons in California. He began writing while incarcerated. Freed on parole, he joined the Black Panthers and published his prison essays in Soul on Ice. In 1968, he fled the country to avoid a return to prison. Cleaver was 62 when he died in Pomona, California, on May 1, 1998.Leroy Eldridge Cleaver was born on August 31, 1935, in Wabbaseka, Arkansas. Growing up, Cleaver witnessed his father beating his mother. Soon after a move to Los Angeles, California, his father left the family.As a teenager, Cleaver was charged with stealing a bicycle and sent to reform school. He would return for a second stay for selling marijuana. In 1954, Cleaver was sent to prison for possession of marijuana.During his incarceration, Cleaver began to develop his own political philosophy. After his release in 1957, he raped an unknown number of women, both black and white. He felt that his rapes of white women were “insurrectionary” rapes, justified by what African Americans had suffered under a system dominated by whites.In 1958, Cleaver was put behind bars once more, this time for assault. There, he became inspired by Malcolm X. He also began writing, detailing his continuing philosophical evolution. Though still passionate about rights for African Americans, he rejected the anger that had motivated his rapes. With the help of his lawyer, his compelling essays appeared in Ramparts magazine. His work gained the attention of supporters who pushed for Cleaver’s release, which happened when he was granted parole in 1966.In 1967, Cleaver joined the Black Panther Party as its minister of information. He became the voice of the activist group, coming up with attention-getting slogans and editing its newspaper. The next year, Soul on Ice, a collection of Cleaver’s prison writings, was released and became a bestseller.1963)On April 6, 1968, Cleaver was involved in a shoot-out with police that left a fellow Black Panther dead.At first jailed, he was soon released on bail, which allowed him to continue his run for president on the Peace and Freedom Party ticket. However, Cleaver was then told he would have to return to custody.Rather than go back to prison, Cleaver fled to Cuba. During his time as a fugitive, he visited North Korea, North Vietnam, the Soviet Union and China. Cleaver also travelled to Algeria, where he set up an international office for the Black Panthers before being kicked out of the group in 1971.Cleaver next moved to France. He had a religious experience there before returning to the United States in 1975. He then proclaimed himself a born-again Christian, decried the socialist systems he had seen and wrote that “the American political system is the freest and most democratic in the world.” Cleaver’s charges from the shoot-out in 1968 were eventually reduced to assault and he was sentenced to community service.Cleaver’s later years saw him shift between different beliefs. He worked with Reverend Sun Myung Moon’s Unification Church, became a member of the Church of Jesus Christ of Latter Day Saints and created “Christlam,” which combined aspects of Christianity and Islam. His politics changed as well. After joining the Republican party, he ran for office several times and supported Ronald Reagan — whom he had formerly denounced — as president.Cleaver also suffered from an addiction to cocaine. This resulted in several arrests, though he did not have to return to prison. A devastating head injury in 1994 — which may have occurred in a drug-related attack — prompted him to recommit to evangelical Christianity. Cleaver died in Pomona, California on May 1, 1998, at the age of 62. Research more about this great American Champion and share it with your babies. Make it a champion day!