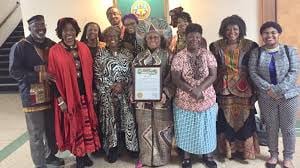 GM – FBF – Today’s American Champion was Dr. McFarlin founded the Black Storytellers of San Diego, Inc. (BSSD) 15 years ago. As an affiliate of the National Association of Black Storytellers (NABS) headquartered in Baltimore, Maryland, their mission is to promote storytelling through education and entertainment, inspire through the power of the word and to keep African/African American culture and traditions alive and connected by telling and teaching stories. Under Dr. McFarlin’s leadership, the Storytellers provided acclaimed performances and presentations primarily throughout San Diego County. They have performed in classrooms, Head Start programs, homeless shelters, military bases, funeral services and hospitals. BSSD, Inc. collaborators have included Valencia Park/Malcolm X Library, National University, Grossmont College, University of San Diego, UCSD, San Diego Women’s Chorus, The Joe & Vi Jacobs Center, and San Diego Museums. Today in our History – November 26, 2013 – Doctor Annjeannette Sophie McFarlin dies.As a child, Annjennette McFarlin loved listening to stories told by the grown-ups in her life. She grew up to teach speech to college students and become a storyteller herself. In her rich, resounding voice, she told tales of everything from African folklore to a rap version of Little Red Riding Hood.In the late 1990s, she helped start Black Storytellers of San Diego Inc., an affiliate of the national association based in Baltimore. The group holds free storytelling sessions at local libraries and schools.”She was the heartbeat of the operation,” said longtime friend and colleague Maxine Sherard. “She brought it alive.”In a 2006 interview with The San Diego Union-Tribune, Dr. McFarlin said of storytelling, “It allows people to take a trip with me and never leave their chairs. You can see it in their eyes, can feel it vibrate off them as they respond to the words and images.”Dr. McFarlin died after months of ill health on Nov. 27 at her home in Chula Vista. She was 78.Weeks before her death, she appeared at the PTE-HOPE Inc. multicultural fair, an event she performed at since its inception in 2007.”Our diverse community will miss her profound cultural wisdom and her kindness,” said Marissa Acierto, business manager of PTE-HOPE Inc. “Her outreach efforts have been a treasure.”Annjennette Sophie McFarlin was born July 14, 1935, in Pensacola, Fla., the eldest of three to Clifford and Thecimar McFarlin. Part of the wave during World War II of African Americans migrating West to find work, she and her family arrived in Chula Vista in the early 1940s, making the trip on a segregated train.A San Diego High School graduate, she eyed a nursing career when she took a speech class at East Los Angeles Community College in 1962 and found her passion for communications. She earned a bachelor’s degree from Cal State Long Beach, a master’s degree from UCLA, and in 1975, a doctorate in rhetorical studies from Washington State University.She penned the book, “Black Congressional Reconstruction Orators and Their Orations” and was considered the first recognized scholar of orator Hallie Quinn Brown.”It was significant research, and she was proud of that,” said longtime friend Joyce Suber.Dr. McFarlin taught at Northern Illinois University, Southwestern College, the University of New Hampshire, SDSU, Cal Poly San Luis Obispo, Washington State University and Grossmont College, where she was chairman of the speech department from 1978 until her retirement in 2002. She was director of the San Diego-Imperial County Community College Association Regional Faculty Internship Project from 1994 to 2002.Through her firm, Adjua Associates, Dr. McFarlin provided communications services to individuals, businesses, universities and public schools. In 1986, she received a San Diego County Black Achievement Award for her work in community education.”She will be missed by the educational community as well as the San Diego community for her dedication and passion for students and for her love of learning,” said Donna Arnold, dean of the School of Arts and Communication at Southwestern College.Dr. McFarlin is survived by a daughter, Annjennette Elizabeth McFarlin, sister Linda Brown, and a brother, Michael McFarlin, all of Chula Vista. Resrearch more about this great American Champion and share it with your babies. Make it a champion day!