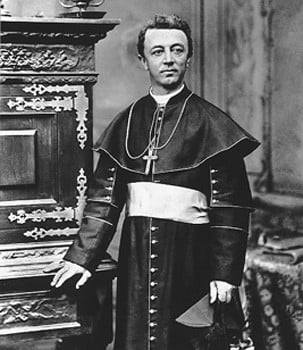 GM – FBF – Today’s American Champion was was an American Roman Catholic priest and the second bishop of Portland, Maine. He was the first Black Catholic priest and bishop in the United States (though he passed for White).Born in Georgia to a mixed-race slave mother and Irish immigrant father, he was ordained in 1854 and consecrated in 1875; knowledge of his African ancestry was largely restricted to his mentors in the Church. (Augustus Tolton, a former slave who was publicly known to be African-American when ordained in 1886, is for that reason sometimes credited as the first African-American Catholic priest rather than Healy.)Healy was one of nine mixed-race siblings of the Catholic Healy family of Georgia who survived to adulthood and achieved many “firsts” in United States history; his brothers Patrick and Alexander also became Catholic priests.James is credited with greatly expanding the Catholic church in Maine at a time of increased Irish immigration, and he also served Abenaki people and many parishioners of French Canadian descent who were traditionally Catholic. He spoke both English and French.Today in our History – June 2, 1975- James A. Healy became the first Roman Catholic bishop and consecrated at a cathedral in Portland, Maine.Healy was one of 10 children born on a Georgia cotton plantation to an Irish immigrant and his common-law wife, a mixed-race slave. Because Healy and his siblings were legally considered illegitimate and slaves, they were barred from attending school in the state, and their parents were forced to send the boys to schools in the North. After encountering racial prejudice at their first school in Long Island, New York,Healy and his brothers completed their education in Massachusetts. In 1849 Healy was the valedictorian of the first graduating class of Holy Cross College. His brother Patrick, who also attended Holy Cross, became the first African American to earn a Ph.D.; he was later president of Georgetown University.After college Healy attended seminary in Montreal and in Paris and was ordained a priest in 1854 (see Researcher’s Note). He did mission work in Boston, where he opposed state anti-Catholic laws. He then served as chancellor of the diocese and, during the Civil War, as secretary to the bishop. He was made pastor of St. James Church in Boston in 1866 and was appointed bishop of Portland by Pope Pius IX in 1875.As bishop (1875–1900), he faced anti-Catholic sentiment but doubled the Catholic population of his diocese, which included Maine and New Hampshire, and increased the number of priests significantly; this growth led to the division of the diocese in two in 1885. During his reign, Healy established numerous churches, schools, convents, and welfare institutions. A tireless advocate for Civil War widows and orphans, he purchased part of an island near Portland to use as a vacation site for children.He was a leader of the American bishops who proposed three decrees that were approved in 1884 by the Third Plenary Council of Baltimore, which was empowered to legislate for all ecclesiastical provinces in the country. In recognition of his support for Native Americans, Healy was made a consultant to the U.S. Bureau of Indian Affairs. On his 25th anniversary as bishop, he was named assistant to the papal throne, a position only one step below cardinal in the church hierarchy. Although an advocate for the less fortunate, Healy never took up specifically African American issues, and he even turned down invitations to speak to African American Catholic groups. Research more about this great American Vhampion and share it with you babies. Make it a champion day!