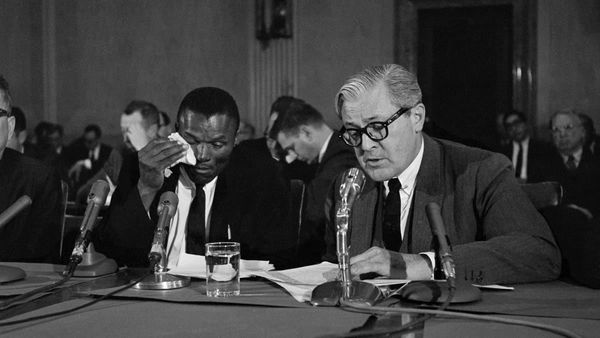 GM – FBF – Today’s American Champion was an American businessman, investor and banker. One of the first wealthy African American entrepreneurs in America, he is credited with being the first African American man to own banks in the United States, specifically owning and controlling white banks in the state of Texas despite Jim Crow laws. Today in our History – September 9, 1999 – Bernard S. Garrett Sr. died.Garrett was born in Willis, Texas. He completed 11th grade in Houston, Texas and married his first wife, Eunice. They had a son, Bernard Garrett Jr. He and Eunice separated and divorced in 1959. He met Linda Marie Guillemette in 1960 and they married in 1962. By 1963, Bernard and Linda had amassed an empire of wealth in real estate all over California, buying the prestigious Bankers Building in 1963 in downtown, Los Angeles. They joined in Martin Luther King Jr.’s August 1963 March on Washington for Jobs and Freedom.Garrett started and ran a cleaning business in Texas. In 1945, the family moved to California where Garrett started another cleaning business and a wastepaper collection business. When Garrett wanted to buy an apartment building in a white neighborhood in Los Angeles, he worked out a deal with the owner, Mr. Barker, who, along with a bank, loaned Garrett money to renovate the apartment units. Garrett was successful in renting the units to black residents and in paying back the loans. He and Barker formed a partnership investing in real estate.In 1954, Garrett was worth $1.5 million. He proposed a deal to Joseph B. Morris that they purchase real estate together. Morris was a graduate of UCLA and a Black businessman who had once owned two nightclubs. Joe and his wife Cora became friends with Linda and Bernard Sr. Together they bought the Bankers Building, the tallest building in Los Angeles. They succeeded by having Linda, whose skin was very fair, and sometimes other white faces, pretend to be the faces of their empire, appearing to run their operations while, in fact, Garrett and Morris were the owners and actual operators of the properties.Morris and Garrett went on to purchase multiple banks and savings & loans, in Texas. They acquired their first bank in Texas in 1964 going on to buy an additional four banks and savings & loans. A racist Democratic power base eventually found a way to stop Bernard and Linda’s growing banking control of white banks in Texas. Senator John L. McClellan from Arkansas brought Garrett before the Senate Investigations Committee in 1965. Bernard Sr and Linda hired lawyers Melvin Belli—who had defended Jack Ruby— and Joe Tonahill to defend Bernard. Bernard Sr was sentenced in 1967 to a stay at Terminal Island Federal Facility in Long Beach, California, shortly after his second daughter Sheila, was born.Bernard Sr and Linda built another real estate empire with an eye on becoming early investors in the newly independent country of The Bahamas. By 1974, they moved their family of six children to the Bahamas to run a large boat marina they bought, while awaiting bank charter approval to own banks in the Bahamas.Bernard Sr and Linda hoped to own banks in the Bahamas, until they encountered a banking charter denial because of his prior racist conviction in Texas. They eventually moved back to the United States.Bernard Garret and Linda had six children . The couple divorced in 1977–78. Garett went on to meet and marry, Kathy Ussery. They had 2 sons. Garrett died in 1999.Garrett and Morris’s story was adapted into the 2019 critically acclaimed film The Banker.In Garrett’s lifetime, he built a real estate and banking portfolio worth tens of millions of dollars, which equates to well over $100 million in today’s dollarsIn 2020, the family established The Bernard Garrett Sr Foundation, a public foundation focused on financial literacy and opportunity for African Americans. Research more about this great American Champion and share it with your babies. Make it a champion day!