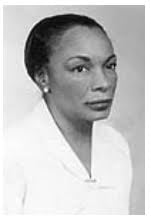 GM – FBF – Today’s American Champion was the first woman to be licensed as an assistant funeral director in Kanawha County, West Virginia.Remember – “I am convinced of the efficiency of direct action. If our people had used it a generation or two ago, we wouldn’t be witnessing the things today that shock and sadden people of all races.” – Elizabeth Harden GilmoreToday in our History – October 28, 1938 – Elizabeth Harden Gilmore, a business leader and civil rights advocate and as a funeral director on November 12, 1940.She opened the Harden and Harden Funeral Home in 1947 (now a National Historic site).She pioneered efforts to integrate West Virginia’s schools, housing, and public accommodations and to pass civil rights legislation enforcing such integration. In the early 1950s, before the Brown v. Board of Education decision mandating school desegregation, Gilmore formed a women’s club which opened Charleston’s first integrated day care center.At about the same time, she succeeded in getting her black Girl Scouts of the USA troop admitted to Camp Anne Bailey near the mountain town of Lewisburg. The two Girl Scouts that she sponsored to integrate Camp Anne Bailey were Deloris Foster and Linda Stillwell.Her Girl Scout Troop, 230 was, also, the first black troop to graduate from Girl Scouting in West Virginia. After co-founding the local chapter of the Congress of Racial Equality (CORE) in 1958, she led CORE in a successful one-year-long sit-in campaign at a local department store called The Diamond.In the 1960s, Gilmore served on the Kanawha Valley Council of Human Relations, where she participated in forums on racial differences and where she helped black renters, displaced by a new interstate highway, find housing.Her successful push to amend the 1961 state civil rights law won her a seat on the powerful higher-education Board of Regents. Gilmore was the first African American to receive such an honor. She stayed on the Board from 1969 to the late 1970s, serving one term as vice-president and one term as president. Her tireless commitment to civil and human rights did not end there. She was also involved with the U.S. Commission on Civil Rights and community education and welfare committees.Elizabeth Harden Gilmore was a Charleston funeral director and a pioneer in the civil right movement in West Virginia. Gilmore was a leader and one of the founders of the local chapter of Congress for Racial Equality (CORE) that led sit-ins throughout Charleston.She also worked to secure the admission of African American Girl Scouts into the previously all-white Camp Anne Bailey. Gilmore led the first sit-in against the Diamond Department Store’s lunch counter in Downtown Charleston. Thanks to her leadership, the store opened the lunch counter to African American patrons in 1960. In 1988, Gilmore’s home was placed on the National Register of Historic Places.Efforts continue to restore the home and operate it in a way that honors Gilmore’s legacy.The Harden-Gilmore house was constructed in 1900 by an Italian immigrant and contractor, Dominic Minotti. Minotti also built the piers on the bridges that connect Kanawha City and South Charleston with Charleston. After several years of retirement, Minotti passed away in 1925. In the mid-1930s, Minotti’s wife passed away and the house became a boarding house for a brief period, and was then put up for sale. Elizabeth Harden Gilmore, the first woman to be a licensed funeral director in Kanawha County, purchased the home in 1947.Elizabeth Harden Gilmore bought the home, with her husband, when she was in her late 30s. They remodeled it to serve as both their home and funeral parlor, Harden and Harden Funeral Home. The ownership of the black funeral home in Charleston, WV, gave Gilmore a sense of recognition as a leader in the black community. Gilmore took this leadership seriously, and became a key figure in the civil rights movement in West Virginia. Gilmore fought for her daughter’s right to be admitted into Camp Anne Bailey. Her daughter’s Girl Scout troop was the first African American group to be admitted into the camp.Gilmore also co-founded the local chapter of the Congress of Racial Equality, or CORE, in 1958. Serving as the co-chairman and the executive secretary of CORE, Gilmore led the efforts of a sit-in at the local Diamond Department Store. After a year and a half long fight, Gilmore and CORE successfully convinced The Diamond to open their lunch counters to African-Americans. Elizabeth Harden Gilmore was active in an impressive number of civic organizations. She founded a women’s club in the early 1950s that opened and operated the first integrated day care center in Charleston. She served on the community welfare council and on the Executive Board of the Citizens Committee for a West Virginia Human Rights Law, a grassroots organization formed to achieve the passage of an enforceable civil rights law.Due to the efforts of that organization, the state civil rights law were amended in 1961. She was a member of the Charleston Chamber of Commerce (serving on their education task force), an adviser to the Volunteer Service Bureau, and a charter member of the Kanawha Valley Council of Human Relations.During her time on the council, she served as the group’s first Vice President, participated in their Panel of American Women (a public forum focused on race and religion), and worked to get African Americans into homes and neighborhoods that had excluded them in the past through the Clearing House for Open Occupancy Selection Effort.She also participated in the U.S. Commission on Civil Rights. In 1969, Gilmore became the first African American appointed to the West Virginia Board of Regents, and eventually served as the vice president and then president. Research more about this great American Champion and share with your babies. Make it a champion day!