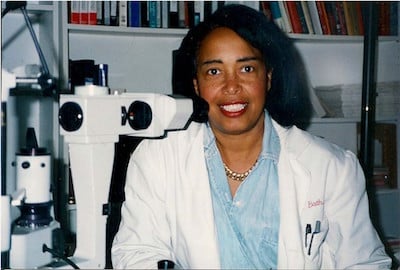 GM – FBF – Today’s American Champion was an American ophthalmologist, inventor, humanitarian, and academic. She was the inventor of laser cataract surgery. Her invention was called Laserphaco Probe. She also became the first woman member of the Jules Stein Eye Institute, first woman to lead a post-graduate training program in ophthalmology, and first woman elected to the honorary staff of the UCLA Medical Center.Bath was the first African-American person to serve as a resident in ophthalmology at New York University. She was also the first African-American woman to serve on staff as a surgeon at the UCLA Medical Center. Bath was the first African-American woman doctor to receive a patent for a medical purpose. The holder of five patents, she also founded the non-profit American Institute for the Prevention of Blindness in Washington, D.C.Today in our History – November 4, 1942 – Dr. Patricia Era Bath (November 4, 1942 – May 30, 2019) was born.Born 1942, in Harlem, New York, Patricia Bath was the daughter of Rupert and Gladys Bath. Her father was an immigrant from Trinidad, a newspaper columnist, a merchant seaman and the first black man to work for the New York City Subway as a motorman. Her father inspired her love for culture and encouraged her to explore different cultures. Her mother was descended from African slaves and Cherokee Native Americans. Throughout her childhood, Bath was often told by her parents to “never settle for less than [her] best” and had been encouraged by their support of her education.Her mother, encouraging her dreams and love of science, had bought her her first chemistry set. By the time she had reached high school, Bath was already a National Science Foundation scholar. This led to her cancer research earning a front page feature in the New York Times. Patricia and her brother attended Charles Evans Hughes High School where both students excelled in science and math.Inspired by Albert Schweitzer’s work in medicine, Bath applied for and won a National Science Foundation Scholarship while attending high school; this led her to a research project at Yeshiva University and Harlem Hospital Center studying connections between cancer, nutrition, and stress. In this summer program, led by Rabbi Moses D. Tendler, Bath had studied the effects of streptomycin residue on bacteria. Through this, she was able to conclude that cancer, itself, was a catabolic disease and tumor growth was a symptom. She had also discovered a mathematical equation that could be used to predict cancer cell growth.The head of the research program realized the significance of her findings and published them in a scientific paper. Her discoveries were also shared at the International Fifth Congress of Nutrition in the fall of 1960.In 1960, at the age of eighteen years old, Bath won a “Merit Award” of Mademoiselle magazine for her contribution to the project.Bath received her Bachelor of Arts in chemistry from Manhattan’s Hunter College in 1964. She then relocated to Washington, D.C. to attend Howard University College of Medicine. Her freshman year at Howard coincided with the Civil Rights Act of 1964.She co-founded the Student National Medical Association and became its first woman president in 1965. At Howard, she was awarded a Children’s Bureau National Government Fellowship Award to do research in Belgrade, Yugoslavia, in the summer of 1967, where her research focused on pediatric surgery. The highlight of the award ceremony was the meeting of Earl Warren, chief justice of the United States Supreme Court, at the US Embassy in Belgrade. Bath graduated with honors from Howard University College of Medicine in 1968. She was awarded the Edwin Watson Prize for Excellence in Ophthalmology by her mentor, Lois A. Young.The assassination of Martin Luther King Jr., in 1968, caused Bath to dedicate herself to achieving one of the dreams of King, namely the empowerment of people through the Poor People’s Campaign. She organized and led Howard University medical students in providing volunteer health care services to the Poor People’s Campaign in Resurrection City in the summer of 1968.Bath returned to her Harlem community and interned at Harlem Hospital Center, which had just become affiliated with Columbia University College of Physicians and Surgeons. During her internship, she observed large proportions of blind patients at Harlem Hospital in comparison to patients at the Columbia University Eye Clinic.Prior to beginning her ophthalmology residency study at NYU in 1970, she was awarded a one-year fellowship from Columbia University to study and contribute to eye care services at Harlem Hospital. She began to collect data on blindness and visual impairment at Harlem Hospital, which did not have any ophthalmologists on staff.Her data and passion for improvement persuaded her professors from Columbia to begin operating on blind patients, without charge, at Harlem Hospital Center. Bath was proud to be on the Columbia team that performed the first eye surgery at Harlem Hospital in November 1969.She served her residency in ophthalmology at New York University, from 1970 to 1973, the first African American to do so. She got married and had a daughter, Eraka, in 1972.Bath died on May 30, 2019, at a University of California, San Francisco medical center from cancer-related complications, aged 76. Research more about this great American Champion and share it with your babies. Make it a champion day!