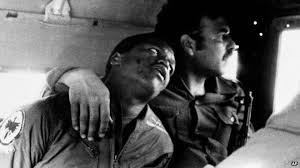 GM -FBF – To be in one’s shoes when they are away from this country and with help can bring them back safely.

Remember – I am so thankful to my God through Jesus Christ and your prayers allowed Reverend Jackson to get me out of here. – Bobby Goodman

Today in our History – January 17, 1984 – Retired U.S. Navy pilot Bobby Goodman was part of a historic moment on this day in 1984. After his plane was shot down over Lebanon and a subsequent capture by Syrian forces, Rev. Jesse Jackson and others helped negotiate Goodman’s release.

Tensions in the region were high as a result of the Lebanese Civil War. Two fighter jets were fired upon from Beirut, prompting U.S. forces to respond with a bombing mission. Goodman and fellow Lt. Mark Lange piloted a bomber plane that was struck down by missiles. In the ejection descent, both men were injured but only Goodman survived. Syrian troops and Lebanese civilians held Goodman captive before he was shipped to Damascus.

Goodman’s capture made international news and his mother made public pleas for his freedom. Rev. Jackson, who was in the midst of attempting to secure the Democratic Party nomination for president, rallied other faith leaders to join a delegation that traveled to Syria to meet with President Hafez al-Assad.

Jackson gathered the likes of Min. Louis Farrakhan, Rev. Jeremiah Wright, Rev. Wyatt T. Walker and many others for the peace mission. After the group met on January 2, Goodman was freed the next day.

Rev. Jackson and Goodman traveled home immediately and met with President Ronald Reagan, who first criticized Jackson’s involvement in the negotiations. Some experts say that Jackson, being somewhat neutral as a man of the cloth, may have been the right person for the job considering Reagan was an unpopular figure in Syria.

Goodman continued to serve, flying in bombing missions during the Gulf War before retiring at the rank of commander in 1995. He and Jackson reunited in 2014 for the first time since their stirring first encounter. Research more about this great American and share with your babies. Make it a champion day!