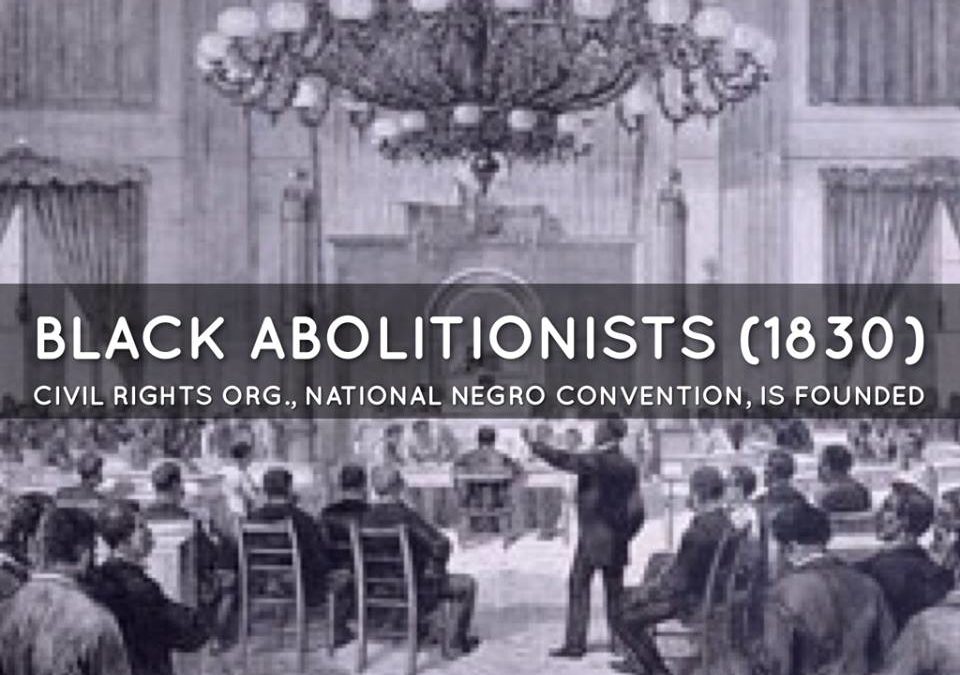 GM – FBF – Today, we examine an orgainization that met annually every first week in June to discuss the state of the Negro Race in America. If you never heard of it – that’s alright let’s learn now. Enjoy!

Remember – Resistance! Resistance! No opressed people have ever secured their liberty without resistance. – Henry Highland Garnet

After more than a decade of organized abolition among northern free blacks, a group of prominent free African American men organized the National Negro Convention Movement. The convention movement among northern free blacks symbolized the growth of a black activist network by the mid-nineteenth century. Between its first meeting in Philadelphia, Pennsylvania in 1831 and its last in Syracuse, New York in 1864, the conventions charted important shifts in rhetoric and focus and the development of a black nationalist political consciousness.

The National Convention met a dozen times before the Civil War in Pennsylvania, Ohio, and New York state. The catalyst for the first meeting in Philadelphia centered upon a proposal by city leaders to oust Cincinnati’s black population as a response to conflict that had emerged over job competition between black and white men. The Cincinnati Riot of 1829 led black leaders to organize throughout the Midwest and Northeast in protest against anti-black violence, discrimination, and slavery.

The first decade of convention meetings revealed growing interracial cooperation between black and white abolitionists. By the late 1840s the gathering were dominated by frustration and disillusionment among many black activists with the “moral suasion” approach of the abolitionist movement which appeared to have little impact on the slave system in the South. The passage of the Fugitive Slave Law in 1850 led to the crystallization of black nationalist consciousness as many African American leaders began to believe the United States would never act justly toward black people. As a result, the Negro conventions at mid-century debated the merits of voluntary African American emigration to places like Canada, Liberia, and the Caribbean versus the solidification of a black nationalist movement in the United States.

During this period convention delegates consistently linked the status of free blacks and slaves in their calls for meetings. In 1855, for example, organizers of the Philadelphia convention wrote that “the elevation of the free man is inseperable (sic) from, and lies at the very threshold of the great work of the slave’s restoration to freedom.”

The majority of delegates to the conventions were men, despite the active participation of free black women in the convention meetings and in the black abolitionist and nationalist movement in general. At the Philadelphia meeting, only two women, Elizabeth Armstrong and Rachel Cliff, served as official delegates.

The Convention Movement died during the Civil War as emancipation came to the four million enslaved people in the South and soon afterwards the promise of citizenship during Reconstruction led, prematurely as it turned out, to the belief that African Americans would fully participate in the nation’s politics. Research more about early black national organizations and share with your babies and make it a champion day!