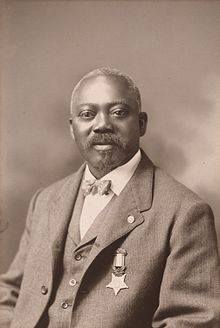 GM – FBF – Today, I want to remind you of the brave men who served in The Civil War. They like in the American Revaluation wanted to show that they (Negro’s) should be looked upon as free men. This individual today was one of the rare people who received one of the highest honors that one can get during battles. Enjoy!

Remember – “The bullet I now carry in my body came whizzing like a mosquito, and I was shot. Not being prostrated by the shot, I continued my course, yet had not gone far before I was struck be a second shot.” – William Carney

Today in our History – William H. Carney earns the Medal of Honor for his bravery during this Battle.

William Harvey Carney (February 29, 1840 – December 9, 1908) was an African American soldier during the American Civil War. Born as a slave, he was awarded the Medal of Honor in 1900 for his gallantry in saving the regimental colors (American Flag) during the Battle of Fort Wagner in 1863. Because his actions preceded those of other medal honorees, he is considered to be the first African American to be granted the Medal of Honor.

William H. Carney was born as a slave in Norfolk, Virginia, on February 29, 1840. How he made his way to freedom is not certain. According to most accounts, he escaped through the Underground Railroad, and joined his father in Massachusetts. Other members of their family were freed by purchase or by the death of their master.

Carney joined the 54th Massachusetts Volunteer Infantry in March 1863 as a Sergeant. He took part in the July 18, 1863, assault on Fort Wagner in Charleston, South Carolina. His actions there ultimately earned him the Medal of Honor. When the color guard was killed, Carney retrieved the American flag and marched forward with it, despite multiple serious wounds. When the Union troops were forced to retreat under fire, he struggled back across the battlefield, eventually returning to his own lines and turning over the colors to another survivor of the 54th, saying, “Boys, I only did my duty; the old flag never touched the ground!” He received an honorable discharge due to disability from his wounds in June 1864.

After his discharge, Carney returned to New Bedford, Massachusetts, and took a job maintaining the city’s streetlights. He then delivered mail for thirty-two years. He was a founding vice president of the New Bedford Branch 18 of the National Association of Letter Carriers in 1890. He married Susannah Williams, and they had a daughter, Clara Heronia. He spent a few years in California, then returned again in 1869.

Carney received his Medal of Honor on May 23, 1900, nearly 37 years after the events at Fort Wagner. (More than half such awards from the Civil War were presented 20 or more years after the fact.) Twenty African Americans had received the medal before him, but because his battle actions happened earlier than the others, he is generally considered the first. His citation reads,

When the color sergeant was shot down, this soldier grasped the flag, led the way to the parapet, and planted the colors thereon. When the troops fell back he brought off the flag, under a fierce fire in which he was twice severely wounded.
Carney died at the Boston City Hospital on December 9, 1908, of complications from an elevator accident at the Massachusetts State House where he worked for the Department of State. His body lay in state for one day at the undertaking rooms of Walden Banks 142 Lenox Street at the wish of his wife and daughter. It was buried in the family plot at Oak Grove Cemetery in New Bedford, Massachusetts. Engraved on his tombstone is an image of the Medal of Honor.

Carney’s face is shown on the monument to Robert Gould Shaw and the 54th on the Boston Common designed by Augustus Saint Gaudens. A New Bedford, Massachusetts, elementary school was named in his honor, and his New Bedford home at 128 Mill Street is listed on the National Register of Historic Places.

In 2015, Carney was honored as one of the Library of Virginia’s “Strong Men & Women in Virginia History” because of his actions during the Civil War.In December 1908, all the flags in the Commonwealth of Massachusetts were lowered to half-mast in tribute to Sgt. William H. Carney, who had died on Dec. 8. Never before had this honor been paid to an ordinary citizen and African American; but Carney was far from ordinary.

Research more about Black Americans fighting in U.S. Wars and share with your babies. Make it a champion day!