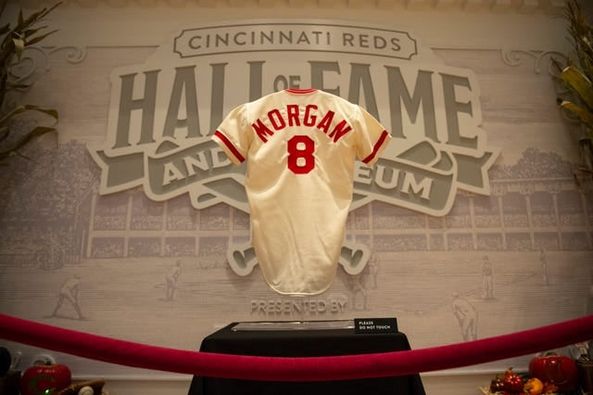 GM – FBF – Today’s American Champion was an American professional baseball second baseman who played Major League Baseball (MLB) for the Houston Astros, Cincinnati Reds, San Francisco Giants, Philadelphia Phillies, and Oakland Athletics from 1963 to 1984. He won two World Series championships with the Reds in 1975 and 1976 and was also named the National League Most Valuable Player (MVP) in each of those years. Considered one of the greatest second basemen of all-time, he was inducted into the Baseball Hall of Fame in 1990.After retiring as an active player, he became a baseball broadcaster for the Reds, Giants, ABC, and ESPN, as well as a stint in the mid-to-late ’90s on NBC’s post-season telecasts, teamed with Bob Costas and Bob Uecker. He hosted a weekly nationally syndicated radio show on Sports USA, while serving as a special advisor to the Reds.Today in our History – November 19, 1975 – Joe Leonard Morgan (September 19, 1943 – October 11, 2020) – named the National League’s Most Valuable Player.“I have never seen anyone, and I mean anyone, play better than Joe has played this year.” – Cincinnati Reds manager Sparky Anderson in 1975Comparable in size to early 20th century players at 5-foot-7, 160 pounds, Joe Morgan instead was perfectly suited to the artificial surface game of the 1970s, when he emerged as one of the key cogs in Cincinnati’s Big Red Machine.In the Reds’ back-to-back World Series championship years in 1975-76, Morgan won back-to-back MVP awards in the National League, as well as two of his five consecutive Gold Glove Awards.Morgan signed with the expansion Houston Colt .45s in 1962. He reached the majors for the first time in 1963 and became Houston’s regular second baseman in 1965. He spent nine seasons with Houston and made two All-Star Game appearances, but became a Hall of Famer after being traded in November 1971 to the Reds and leaving Houston’s cavernous Astrodome.Morgan led the league in walks, on-base percentage and runs scored in his first season with Cincinnati and earned All-Star Game nods in each of his eight seasons with the Reds. In his peak years of 1975 and ’76, he twice led all of baseball in OPS (on-base plus slugging percentage.)After leaving the Reds as a 36-year-old free agent following the 1979 season, Morgan remained a key player on winning teams, playing for Houston’s division winner in 1980, playing two productive seasons in San Francisco and then belting 16 homers for Philadelphia’s pennant-winners in 1983. He played his final season in Oakland – where he grew up – in 1984 before embarking on a long career as a broadcaster. He teamed with Jon Miller for 21 seasons on ESPN’s Sunday Night Baseball.Morgan finished his career with 2,517 hits, 1,650 runs scored, 268 home runs, 689 stolen bases and 1,865 walks.Morgan was elected to the Hall of Fame in 1990. He passed away on Oct. 11, 2020. Research more about this great American Champion and share it with your babies. Make it a champion day!