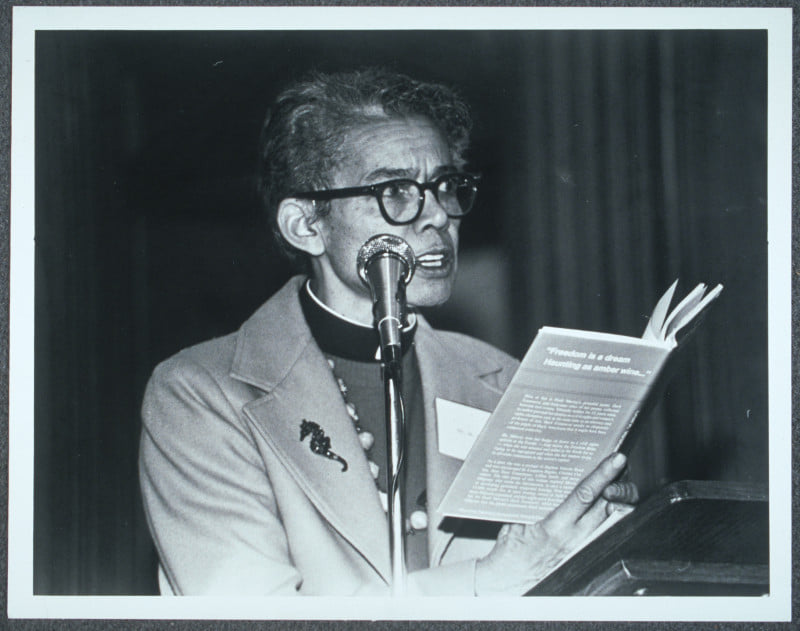 GM – FBF – Today’s American Champion was an American civil rights activist who became a lawyer, a women’s rights activist, Episcopal priest, and author. Drawn to the ministry, in 1977 she was the first African-American woman to be ordained as an Episcopal priest, in the first year that any women were ordained by that church.Born in Baltimore, Maryland, she was virtually orphaned when young, and she was raised mostly by her maternal grandparents in Durham, North Carolina. At the age of 16, she moved to New York City to attend Hunter College, and graduated with a Bachelor of Arts degree in English in 1933.In 1940, she sat in the whites-only section of a Virginia bus with a friend, and they were arrested for violating state segregation laws. This incident, and her subsequent involvement with the socialist Workers’ Defense League, led her to pursue her career goal of working as a civil rights lawyer. She enrolled in the law school at Howard University, where she also became aware of sexism.She called it “Jane Crow”, alluding to the Jim Crow laws that enforced racial segregation in the Southern United States. She graduated first in her class, but she was denied the chance to do post-graduate work at Harvard University because of her gender. She earned a master’s degree in law at University of California, Berkeley, and in 1965 she became the first African American to receive a Doctor of Juridical Science degree from Yale Law School.As a lawyer, she argued for civil rights and women’s rights. National Association for the Advancement of Colored People (NAACP) Chief Counsel Thurgood Marshall called her 1950 book, States’ Laws on Race and Color, the “bible” of the civil rights movement. she served on the 1961–1963 Presidential Commission on the Status of Women, being appointed by John F. Kennedy. In 1966 she was a co-founder of the National Organization for Women. Ruth Bader Ginsburg named her as a coauthor of a brief on the 1971 case Reed v. Reed, in recognition of her pioneering work on gender discrimination. This case articulated the “failure of the courts to recognize sex discrimination for what it is and its common features with other types of arbitrary discrimination.” She held faculty or administrative positions at the Ghana School of Law, Benedict College, and Brandeis University.In 1973, she left academia for activities associated with the Episcopal Church. She became an ordained priest in 1977, among the first generation of women priests. She struggled in her adult life with issues related to her sexual and gender identity, describing herself as having an “inverted sex instinct”. She had a brief, annulled marriage to a man and several deep relationships with women. In her younger years, she occasionally had passed as a teenage boy. A number of scholars, including a 2017 biographer have retroactively classified her as transgender. In addition to her legal and advocacy work, she published two well-reviewed autobiographies and a volume of poetry. Her volume of poetry, Dark Testament, was republished in 2018.Today in our History – November 20, 1910 – Anna Pauline “Pauli” Murray was born.Pauli Murray College honors Pauli Murray, a remarkable civil rights and women’s rights advocate, who contributed immensely to the dismantling of segregation and discrimination. Pauli pioneered a vision for a society that valued diversity and rallied around our common human virtues. Pauli Murray College hopes to carry forward her vision for a better society through its community members and its commitment to promoting diversity and inclusion.Born Anna Pauline Murray, she chose to be called the gender non-specific Pauli, and we follow her preference. Pauli was a jurist and activist who contributed some of the legal groundwork to the civil rights movement. Early on in her life, Pauli was committed to pursuing an education and left Durham, NC, as a teenager to attend Hunter College in the 1920s and 1930s. Later, her failed attempt to study at the all-white University of North Carolina garnered national attention and established her as civil rights activist.In 1965, Pauli became the first African-American to receive a JSD degree from Yale Law School. She wrote “Jane Crow and the Law: Sex Discrimination and Title VII” and “Roots of the Racial Crisis: Prologue to Policy,” both of which proved profoundly influential in challenging the legal foundations of racial discrimination.Pauli was a trailblazer throughout her life. She wrestled with her gender identity, and her most intense romantic relationships were with women. She co-founded the National Organization for Women, serving as a vice-president of Benedict College in South Carolina, and becoming the first person to teach African-American Studies and Women’s Studies at Brandeis University. Later in her life, she became the first African-American woman ordained as an Episcopal priest, and received an honorary degree from the Yale Divinity School in 1979.Pauli’s career reveals bravery, persistence, and diligence in her pursuit of an equal society. Her story and achievements continue to inspire the work of scholars and activists today. Research more about this great American Champion and share it with your babies. Make it a champion day!