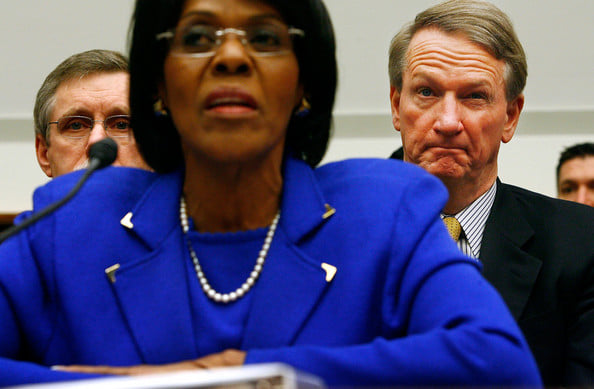 GM – FBF – Today’s American Champion is a former American politician who was U.S. Representative for Michigan’s 13th congressional district from 1997 to 2011. She is a member of the Democratic Party. In August 2010 she lost the Democratic primary election to Hansen Clarke, who replaced her in January 2011 after winning the 2010 general election. She is also the mother of former Detroit Mayor Kwame Kilpatrick.Today in our History – December 6, 2006 – Carolyn Jean Cheeks Kilpatrick – she was unanimously elected Chairperson of the Congressional Black Caucus. Her son, Kwame, was elected to fill her Michigan House seat in 1996. In 2001 he became at 30 the youngest Mayor of Detroit. Born Carolyn Jean Cheeks in Detroit, she graduated from Detroit High School of Commerce. She then attended Ferris State University in Big Rapids from 1968-70 and earned a B.S. from Western Michigan University (Kalamazoo) in 1972. She earned a M.S. from the University of Michigan in 1977. She worked as a high school teacher and was later a member of the Michigan House of Representatives from 1979-96.In 1996, Kilpatrick challenged three-term incumbent Barbara-Rose Collins in the 1996 Democratic primary for what was then the 15th District. She defeated Collins by a shocking margin, taking 51.6 percent of the vote to Collins’ 30.6 percent. This was tantamount to election in this heavily Democratic, black-majority district. She was reelected six times, never dropping below 80 percent of the vote. Her district was renumbered as the 13th District after the 2000 Census. She faced no major-party opposition in 2004 and was completely unopposed in 2006.Her first serious opposition came during the 2008 primary—the real contest in this district—when she was challenged by both former State Representative Mary D. Waters and State Senator Martha Scott in the Democratic primary. Kilpatrick’s campaign was plagued by the controversy surrounding her son and his involvement in a text messaging sex scandal. On the August 5 primary election, Kilpatrick won with 39.1 percent of the vote, compared to Waters’ 36 percent and Scott’s 24 percent.In 2010, she was again challenged in the Democratic primary. Unlike in 2008, her opposition coalesced around State Senator Hansen Clarke, who defeated her in the August 3 primary. “This is the final curtain: the ending of the Kilpatrick dynasty,” said Detroit political consultant Eric Foster of Foster, McCollum, White and Assoc.NPR and CBS News both noted that throughout her re-election campaign, she was dogged by questions about her son, Kwame Kilpatrick, who is in prison on numerous corruption charges.Michigan Live reported that her election defeat could in part be attributed to the Kwame Kilpatrick scandals.Kilpatrick was married to Bernard Nathaniel Kilpatrick, with whom she has daughter Ayanna and son Kwame Kilpatrick, a former Mayor of Detroit. Carolyn Cheeks Kilpatrick divorced Bernard Kilparick in 1981. She has five grandsons including two sets of twins and one granddaughter. Both her former husband and son were on trial, under an 89-page felony indictment. On March 11, 2013, her son was found guilty on 24 of 30 federal charges and her former spouse was found guilty on 1 of 4 federal charges.• She is a member of the Detroit Substance Abuse Advisory Council.• She is a member of Delta Sigma Theta sororityResearch more about this great American Champion and share it with your babies. Make it a champion day!