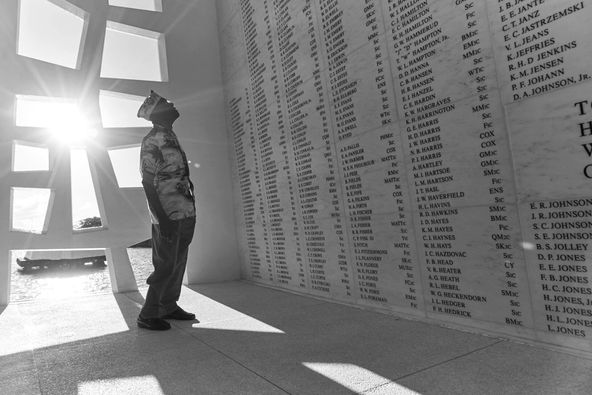 GM – FBF – Today’s American Champion was one of the men some 100 survivors of the attack on Pearl Harbor will gather in Hawaii today 79 years after the day which drew the US into World War II. The Japanese air and naval strike on the American military base claimed nearly 2,400 lives, destroyed over 160 aircraft and beached, damaged or destroyed over 20 ships. President Franklin D. called it ” a date which will live in infamy” when he addressed the Congress the next day asking to declare war with Japan. Today in our History – December 7, 1941 – Phoenix Nelson G. Mitchell, Jr. helps fight off the Japanese attack on Pearl Harbor, Hawaii.Nelson was born January 19, 1920 on a family farm in Bivins, TX (Cass County) where he picked cotton, tended a vegetable garden, cared for livestock, and engaged in other daily chores with two sisters and five brothers. There was very little time for play, except for church on Sundays and occasional picnics. He enjoyed baseball and basketball when time allowed.He is preceded in death by his wife, Fannie, his father, Nelson Sr., mother Wafie, sisters Surreah and Marie, and brothers Maurice, Risdon, Leondas (L.K.), William Morris and Roscoe.Nelson joined the U.S. Navy in August 1940—not to see the world—but to provide extra income for his family. In the face of limited opportunities, he served honorably, diligently, and without bluster as a stewards mate and cook.Until his death, it was widely believed that he was the last living African American survivor of the assault on Pearl Harbor on Sunday, December 7, 1941. During the attack, he was aboard the Destroyer USS Jarvis. Nelson also spent time aboard the USS Selfridge, the USS Case, and a Navy oil tanker during his eight years in the Navy.Nelson purchased 3.5 acres of land in southeast Phoenix (near the Tempe border) in 1945 and built a “modern” house on the property in 1948-49. He married Fannie Lee Epps of Linden, TX in 1946 before leaving the Navy in 1948. When they put down roots in Phoenix, they raised three children, many cows (including a trio named Blackie, Brownie and Hamburger), hundreds of chickens, and alfalfa.He worshipped at Willow Grove Baptist Church in the South Phoenix Okemah community for more than 50 years.Following his service in the Navy, Nelson spent more than 20 years in civil service at Luke AFB. (Nelson retired in 1970 to care for his ailing wife.)Nelson honed his talents as a horticultural Phenom at his Phoenix home. His yard radiated vibrant color and life with more than 250 rose bushes and other flowers, several pecan trees, and orange, lemon, grapefruit, peach and apricot trees. He won numerous rose show and county and state fair awards for his prowess in the rose garden.In the early 1990s, Nelson moved to Peoria, AZ where he made many new friends and enjoyed his senior independent life. His passion for roses continued at his Peoria residence, and he also raised vegetables that he feasted on almost daily. Neighbors, including kids, frequently stopped by to sample a baked treat (Nelson was an excellent baker of cookies, cakes and pies) or simply marvel at his garden of roses. He became a lifelong consulting rosarian and was a frequent judge at local and regional rose shows. He enjoyed serving with the Phoenix Rose Society, the Valley of the Sun Gardeners club, the West Valley Rose Society, the Mesa-East Valley Rose Society, and the Desert Rose Society, among others.Nelson eventually joined Valley Community Church in Peoria and attended services until health issues made it difficult to continue.For the last two years, Nelson led a quiet and reflective life with his son, Lynwood and his family in Mission Viejo, CA.Nelson is survived by three children, Cynthia V. Mitchell of Phoenix, Nelson G. Mitchell III (and daughter-in-law Barbara) of Tempe, Lynwood A. Mitchell (and daughter-in-law Dora) of Mission Viejo, CA; four grandchildren, Lynwood X. Mitchell, Michael A. Mitchell, Nicole Rosas (Dave), and Tarah M. Mitchell; five great-grandchildren, Jordan Mitchell, Mariah Mitchell, Xavier Mitchell, Jr., Mackenzie Mitchell, and Korbyn Mitchell; and a great-great-grandson, Jaden Mitchell. Research more about these great American Champions who fought during the surprise attack at Pearl Harbor and share them with your babies. Make it a champion day!