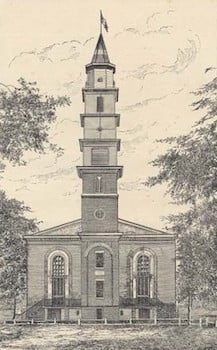 GM – FBF – Today’s American Champion event is located in Savannah, Georgia, claims to be derived from the first black Baptist congregation in North America. While it was not officially organized until 1788, it grew from members who founded a congregation in 1773. Its claim of “first” is contested by the Silver Bluff Baptist Church, Aiken County, South Carolina (1773), and the First Baptist Church of Petersburg, Virginia, whose congregation officially organized in 1774. The Church operates a museum which displays memorabilia dating back to the 18th century.Today in our History – January 19, 1788 – First African Baptist Church was founded.First African Baptist Church (FABC) was organized in 1773 under the leadership of Reverend George Leile. The 1773 organization date for the church makes it clear that FABC is older than the United States (1776). In May of 1775 Rev. Leile was ordained as the pastor and December of 1777 the church was officially constituted as a body of organized believers. Four converts Rev. Andrew Bryan, his wife, Hannah Bryan, Kate Hogg, and Hagar Simpson would form a part of the nucleus of First African Baptist Church’s early membership.In 1782, rather than risk reenslavement, Pastor Leile left with the British when Savannah was evacuated and migrated to Jamaica. He became the first American missionary, 30 years before Adoniram Judson left for Burma. He was also the first Baptist missionary in Jamaica.Under the leadership of the 3rd Pastor Reverend Andrew C. Marshall, the congregation obtained the property where the present sanctuary stands. Reverend Marshall also organized the first black Sunday School in North America and changed the name of the church from “First Colored Baptist” to “First African Baptist”. The sanctuary was completed in 1859 under the direction of the 4th Pastor, Reverend William J. Campbell. The light fixtures and baptismal pool are all original to the church. They were installed during the Pastorate of Reverend Emmanuel King Love. The light fixtures were originally gas, but were later converted into electrical.The solid oak pews were installed in the main sanctuary during the early 1900’s under the leadership of the 7th Pastor Reverend James Wesley Carr. The pews located in the balcony are original to the church. These pews were made by enslaved Africans, and are nailed into the floors. On the outside of some of the pews are writings done in a classical West African Arabic script from the 1800s. The pipe organ, also, located in the balcony, was commissioned in 1834 by St. John the Baptist Catholic Church, the local white Catholic church. St. John the Baptist passed the organ on to St. Joseph Catholic Church, the local black Catholic church who eventually donated the organ, presumably in 1888, to First African Baptist Church.The holes in the floor are in the shape of an African prayer symbol known to some as a BaKongo Cosmogram. In parts of Africa, it also means “Flash of the Spirits” and represents birth, life, death, and rebirth. March Haynes, a deacon of the church, enlisted in the Civil War on the Union side and did valiant service. He was active in helping captive Africans to escape to the Union side, where they enjoyed freedom. Deacon Haynes was an unsung hero of the movement of freedom known popularly as the “Underground Railroad”.First African Baptist Church has been a place of leadership and service since its inception. Reverend Emmanuel King Love, 6th Pastor, led the movement to establish Savannah State University, formerly known as Georgia State Industrial College for Colored Youth. Rev. Love also played a big role in the establishment of Morehouse College in Atlanta, GA; Paine College in Augusta, GA.Visitors from all walks of life have visited out sanctuary and left inspired including Grammy award-winning artist John Mellencamp, actor and civil rights activist Lou Gossett, Jr., Rev. Dr. Jesse Jackson, former Vice President Al Gore, Debbie Allen, and Wally Amos.Currently, Reverend Thurmond N. Tillman currently serves as the 17th pastor of the church. He was called to serve as pastor in 1982. He serves on many organization boards that help empower the people of Savannah, GA. Our present mission is to Seek God, Shape Lives, and Serve the World.First African Baptist Church is a National Historic Landmark and, as such, is registered with the National Register of Historic Places. Additional historic designations are as follows: Buildings of religious function of the National Register of Historic Places in Georgia (U.S. state); 1850’s churches in Georgia (U.S. state); Built in Georgia (U.S. state) in 1859; and, Churches in the United States built in 1859.Research more about this American Champion building and share it with your babies. Make it a champion day!