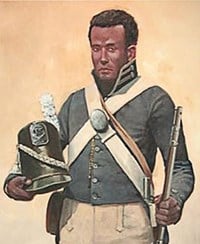 GM – FBF – Today’s American Champion event is not talked about that much because not many records are kept about it but today we will gain some knowledge of this.For USS Constitution, which carried approximately 450 men, seven to 15 percent of the crew translates to approximately 32 to 68 black or multiracial sailors per cruise during the War of 1812. Unfortunately, discovering just who these men were is ex­tremely difficult. The USS Constitution Museum has collected substantial demo­graphic and biographical information for over 200 of the approximately 1,168 sail­ors assigned to Constitution during the War of 1812. Unfortunately, of those 200 or so sailors, only three are identifiable as black.June 16, 1812 – One is Jesse Williams, a native of Pennsylvania who joined USS Constitution as an ordinary seaman in Boston.65 Muster Roll(s), USS Constitution, T829, National Archives and Records Administration, Washington, D.C. Williams stood five feet, six inches tall and was stoutly built with a round face and black hair.6666 Dartmoor: Public Record Office, Adm 103/87-91, The National Archives, Kew, Richmond, Surrey, United Kingdom and General Entry Books of American Prisoners of War at Quebec, RG8, C series, 694A-B, Library and Archives Canada, Ottowa, Canada. During Constitution’s battle with HMS Guerriere, Williams served as the first sponger for the number three long gun on the gun deck. He also served aboard during the battle with HMS Java on December 29, 1812. Williams was transferred to the Great Lakes in April 1813, where he was wounded in battle and received a share of prize money.6767 Muster Roll(s), USS Constitution, T829. Later, while serving aboard USS Scorpion, Williams was captured by the British and sent to Dartmoor Prison in England.6868 Dartmoor: Public Record Office, Adm 103/87-91. After being released at the end of the war, Williams made the rank of able seaman in December 1814. He left the navy the following year.6969 Muster Roll(s), USS Constitution, T829. Six years later, in recognition of his service on the Lakes, the state of Penn­sylvania awarded Williams, as well as other service members from the state, a silver medal.7070 “Correspondence Relating to Medallists, 1812-1814,” Pennsylvania Archives, Sixth Series IX (ca. 1734-1847): 248-304.Another man, James Bennett, had a similar story. Bennett was born free in Duck Creek Crossroads, Delaware in about 1782. In 1810, he, along with his sister, Mary Williams, traveled to Philadelphia to obtain a seaman’s protection certificate to serve as written proof of his American citizenship while at sea. The certificate, made out to Bennett from Philadelphia Alderman Alexander Tod, includes a detailed descrip­18tion of the sailor. Alderman Tod wrote:“Negroe, born free — five feet 11 7/8 inches high, with his shoes, Black com­plexion, Black hair, 28 years of age, marked with scar over his right eye brow, mark of inoculation on his left arm, mark by a burn on his right elbow, mark on the palm of his left hand by being laid open, left knee crook­ed.”7171 Tyrone G. Martin, “Ship’s Company,” Captain’s Clerk, last modified September 30, 2019, http://captainsclerk.info/.Bennett enlisted in the U.S. Navy in April 1811 and joined Constitution’s crew as an ordinary seaman, promptly becoming a member of the carpenter’s crew.7272 Muster Roll(s), USS Constitution, T829. He sailed on a diplomatic voyage to France and Holland, and remained aboard for the first two cruises of the War of 1812. During the victorious battles over HMS Guerriere on August 19, 1812 and HMS Java on December 29, 1812, Bennett, with the rest of the carpenter’s crew, labored deep in the ship’s hold to plug holes made by enemy shot. For his effort he received a portion of the $100,000 in prize money awarded to the crew in addition to his monthly pay. When the ship returned to Boston, Bennett was drafted to the Great Lakes to serve under Master Commandant Oliver Hazard Perry at the Battle of Lake Erie. Unfortunately, Bennett suffered a mortal wound during battle and never made it home.7373 Ibid. In 1857, his wife, Sarah Bennett, appealed to Congress for his back pay and prize money, but her plea was rejected.7474 War of 1812 Pension and Bounty Land Warrant Application Files, ca. 1871-ca.1900, RG15, National Archives and Re­cords Administration, Washington, D.C.The third black sailor identified from Constitution’s War of 1812 crew is David Debias. Debias was born in Boston on August 9, 1806. He lived with his parents on Belknap Street (now Joy Street) on the north slope of Beacon Hill.7575 Thomas Falconer, letter to Secretary of the Navy, March 16, 1838, M124, National Archives and Records Administration, Washington, D.C. On December 17, 1814, Debias’ father entered him on board Constitution.7676 Muster Roll(s), USS Constitution, T829.At eight years old, Debias was rated a boy — a rank designated for the least skilled, though not necessarily the youngest, sailors — and assigned as servant to Master’s Mate Nathaniel G. Leighton. He was aboard for the battle with HMS Cyane and HMS Levant on the night of February 20, 1815, and was subsequently placed on the captured Levant, along with Master’s Mate Leighton, as part of the prize crew. However, Levant was soon recaptured by a British squadron on its way back to the 19United States, and Debias was imprisoned in Barbados until May. Upon his release, he returned home and was reunited with his family. Debias was discharged and paid off in July 1815.77 In 1821, he joined the U.S. Navy again, sailing once more on Con­stitution to the Mediterranean Sea.78 He returned to the United States in 1824 and joined the merchant service.79In 1838, Debias left his ship in Mobile, Alabama, started walking north, and was picked up as a runaway slave in Winchester, Mississippi.80 His plight caught the at­tention of a local lawyer named Thomas Falconer, who was convinced that Debias was a free man. Falconer wrote to Secretary of the Navy Mahlon Dickerson seeking proof of Debais’ status. Falconer’s letter to Dickerson pleads Debias’ case, describing his service to his country and requesting Debias’ naval records.81 Dickerson com­plied with Falconer’s request and sent proof of Debias’ service, but no confirmed records of his fate have yet been found.82 Unfortunately, Debias’ story, much like the story of many black sailors from the War of 1812, is incomplete. Reserach more about this great American event and shear it with your babies. Make it a champion day!