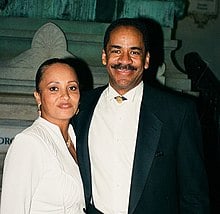 GM – FBF – Today’s American Champion is an American actress, designer, and former model. She is best known for The Fresh Prince of Bel-Air (1993–1996) in her role as the second Vivian Banks on the NBC sitcom.Today in our History – July 13, 1948 – Daphne Etta Maxwell Reid is born.Reid was born in New York City, the daughter of Rosalee and Green Maxwell. She is a graduate of The Bronx High School of Science. She received a degree in interior design and architecture from Northwestern University, which she attended on a scholarship and where she became the first African-American woman to be named homecoming queen. While at Northwestern she began a modeling career, eventually signing with the Eileen Ford modeling agency. She was the first black woman to be on the cover of Glamour magazine.She has appeared in numerous television programs. Her best-known role was replacing Janet Hubert-Whitten as Vivian Banks on the NBC sitcom The Fresh Prince of Bel-Air from 1993 to 1996. She joined the show right after the fictional character Nicky Banks was born toward the end of Season 3, when Hubert-Whitten did not renew her contract.Before that role, she starred in several television series including, Simon & Simon, Frank’s Place, and Snoops.She had a recurring role as JT’s mother, Frances Hunter, on the UPN sitcom Eve, and then played Juanita Lawrence on the BET sitcom Let’s Stay Together.Reid is also an accomplished photographer as well as a designer and clothing creator.During the 1980s and 1990s Reid served on the advisory board of the National Student Film Institute.She is a recipient of the Women of Vision Award from Women in Film & Video, among a myriad of other awards.With her husband, actor Tim Reid, she owned and operated New Millennium Studios in Petersburg, Virginia, until 2014.She also served on the board of visitors at Virginia State University, for eight years. She was appointed in July 2008.On July 31, 2010, she became an honorary member of Delta Sigma Theta sorority, during their 50th national convention in New Orleans.She has one son, Chris Tubbs, from her first marriage to the late Robert Tubbs; and two stepchildren, Timothy II (b. 1968) and Tori Reid (b. 1971). She also has three grandchildren.Born Daphne Maxwell, actress Daphne Reid was born on July 13, 1948. Growing up on Manhattan’s West Side, Reid was influenced early on by her teachers to enroll in a challenging high school. Despite her initial desire to attend the Fashion Industries High School, she was swayed to attend the Bronx High School of Science.While attending Bronx Science, Reid was highly involved, serving as senior class president and joining the Group Theater Workshop. After her graduation, she received a scholarship to attend Northwestern University in Evanston, Illinois. While there, she was named homecoming queen, becoming the first black woman at the school to attain the title. She went on to earn her B.A. in 1970.While still a student at Northwestern, one of Reid’s teachers from Bronx Science submitted a photograph of her to a modeling agency, and her modeling career took off. In 1969, Reid became the first African American woman to grace the cover of Glamour. While in Chicago in the 1970s, Reid met comedian Tim Reid and the two became fast friends, and they would go on to marry in 1982.Reid made her television debut in 1979 on the short-lived series, The Duke, and made the move to Los Angeles. There, she appeared on several episodes of the popular show WKRP in Cincinnati opposite her future husband. Throughout the 1980s, she would appear on numerous hit television shows, including T.J. Hooker, The A-Team, Murder, She Wrote and Simon & Simon, where she again worked with her husband.In 1987, her husband co-produced the critically acclaimed but short-lived series Frank’s Place, and featured Tim and Daphne opposite one another. The two went on to work together on Snoops before hosting a talk show, The Tim and Daphne Show. In 1993, Reid made her biggest move yet, when she joined the cast of the hit series, The Fresh Prince of Bel Air in the role of Aunt Viv, and she remained there until the show’s end in 1996.In 1997, Reid, her husband, Mark Warner (now governor of Virginia) and Dan Hoffler founded New Millennium Studios in Petersburg, Virginia. The studio was the first African American production operation since scar Micheaux’s to handle a project from start to finish.A number of documentaries and films have since been filmed there, including The Contender and Hearts in Atlantis. They have also re-released The Spook Who Sat By the Door, by Sam Greenlee, as a part of their Obsidian Gold Series, and are working on a series entitled American Legacy highlighting historical contributions of African Americans. Currently, Reid is working on the sitcom Eve on UPN. Research more about this great American Champion and share it with your babies. Make it a champion day!