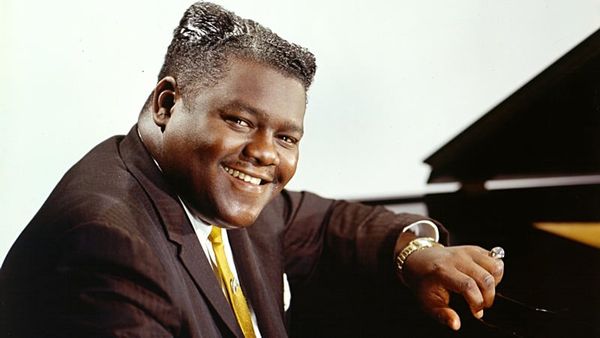 GM – FBF – Today’s American Champion was an American pianist and singer-songwriter. One of the pioneers of rock and roll music, Domino sold more than 65 million records. Between 1955 and 1960, he had eleven Top 10 US pop hits. By 1955 five of his records had sold more than a million copies, being certified gold. The Associated Press estimates that during his career, the artist “sold more than 110 million records and the Grammy organization states that Domino landed 37 songs in the Top 40 on the Billboard Hot 100 throughout his career, including 11 that peaked inside the Top 10”.His humility and shyness may be one reason his contribution to the genre has been overlooked. The significance of his work was great however; Elvis Presley declared Domino to be “the real king of rock ‘n’ roll” and once announced that Domino “was a huge influence on me when I started out”.Four of Domino’s records were named to the Grammy Hall of Fame for their significance: “Blueberry Hill”, “Ain’t It A Shame”, “Walking to New Orleans” and “The Fat Man”. “The Fat Man” “is cited by some historians as the first rock and roll single and the first to sell more than 1 million copies” Today in our History – October 24, 2017 – Antoine Dominique Domino Jr. (February 26, 1928 – October 24, 2017), known as Fats Domino died.Antoine Domino Jr. was born and raised in New Orleans, Louisiana, the youngest of eight children born to Antoine Caliste Domino (1879–1964) and Marie-Donatille Gros (1886–1971). The Domino family was of French Creole background, and Louisiana Creole was his first language. Antoine was born at home with the assistance of his grandmother, a midwife. His name was initially misspelled as Anthony on his birth certificate. His family had recently arrived in the Lower Ninth Ward from Vacherie, Louisiana. His father was a part-time violin player who worked at a racetrack. He attended Howard University, leaving to start work as a helper to an ice delivery man. Domino learned to play the piano in about 1938 from his brother-in-law, the jazz guitarist Harrison Verrett. The musician was married to Rosemary Domino (née Hall) from 1947 until her death in 2008; the couple had eight children: Antoine III (1950-2015), Anatole, Andre (1952-1997), Antonio, Antoinette, Andrea, Anola, and Adonica. Even after his success he continued to live in his old neighborhood, the Lower Ninth Ward, until after Hurricane Katrina, when he moved to a suburb of New Orleans. By age 14, Domino was performing in New Orleans bars. In 1947, Billy Diamond, a New Orleans bandleader, accepted an invitation to hear the young pianist perform at a backyard barbecue. Domino played well enough that Diamond asked him to join his band, the Solid Senders, at the Hideaway Club in New Orleans, where he would earn $3 a week playing the piano. Diamond nicknamed him “Fats”, because Domino reminded him of the renowned pianists Fats Waller and Fats Pichon, but also because of his large appetite. Domino was signed to the Imperial Records label in 1949 by owner Lew Chudd, to be paid royalties based on sales instead of a fee for each song. He and producer Dave Bartholomew wrote “The Fat Man”, a toned down version of a song about drug addicts called “Junker Blues”; the record had sold a million copies by 1951. Featuring a rolling piano and Domino vocalizing “wah-wah” over a strong backbeat, “The Fat Man” is widely considered the first rock-and-roll record to achieve this level of sales. In 2015, the song would enter the Grammy Hall of Fame. Domino released a series of hit songs with Bartholomew (also the co-writer of many of the songs), the saxophonists Herbert Hardesty and Alvin “Red” Tyler, the bassist Billy Diamond and later Frank Fields, and the drummers Earl Palmer and Smokey Johnson. Other notable and long-standing musicians in Domino’s band were the saxophonists Reggie Houston, Lee Allen, and Fred Kemp, Domino’s trusted bandleader. While Domino’s own recordings were done for Imperial, he sometimes sat in during that time as a session musician on recordings by other artists for other record labels. Domino’s rolling piano triplets provided the memorable instrumental introduction for Lloyd Price’s first hit, “Lawdy Miss Clawdy”, recorded for Specialty Records on March 13, 1952 at Cosimo Matassa’s J&M Studios in New Orleans (where Domino himself had earlier recorded “The Fat Man” and other songs). Dave Bartholomew was producing Price’s record, which also featured familiar Domino collaborators Hardesty, Fields and Palmer as sidemen, and he asked Domino to play the piano part, replacing the original session pianist. Domino crossed into the pop mainstream with “Ain’t That a Shame” (mislabeled as “Ain’t It a Shame”) which reached the Top Ten. This was the first of his records to appear on the Billboard pop singles chart (on July 16, 1955), with the debut at number 14.A milder cover version by Pat Boone reached number 1, having received wider radio airplay in an era of racial segregation. In 1955, Domino was said to be earning $10,000 a week while touring, according to a report in the memoir of artist Chuck Berry. Domino eventually had 37 Top 40 singles, but none made it to number 1 on the Pop chart. Domino’s debut album contained several of his recent hits and earlier blues tracks that had not been released as singles, and was issued on the Imperial label (catalogue number 9009) in November 1955, and was reissued as Rock and Rollin’ with Fats Domino. The reissue reached number 17 on the Billboard Pop Albums chart. His 1956 recording of “Blueberry Hill”, a 1940 song by Vincent Rose, Al Lewis and Larry Stock (which had previously been recorded by Gene Autry, Louis Armstrong and others), reached number 2 on the Billboard Juke Box chart for two weeks and was number 1 on the R&B chart for 11 weeks. It was his biggest hit, selling more than 5 million copies worldwide in 1956 and 1957. The song was subsequently recorded by Elvis Presley, Little Richard, and Led Zeppelin. Some 32 years later, the song would enter the Grammy Hall of Fame. Domino had further hit singles between 1956 and 1959, including “When My Dreamboat Comes Home” (Pop number 14), “I’m Walkin'” (Pop number 4), “Valley of Tears” (Pop number

. In 1957, Domino made an insightful comment: “What they call rock ‘n’ roll now is rhythm and blues. I’ve been playing it for 15 years in New Orleans”.Domino appeared in two films released in 1956: Shake, Rattle & Rock! and The Girl Can’t Help It. On December 18, 1957, his hit recording of “The Big Beat” was featured on Dick Clark’s American Bandstand. He was also featured in a movie of the same name. On November 2, 1956, a riot broke out at a Domino concert in Fayetteville, North Carolina. The police used tear gas to break up the unruly crowd. Domino jumped out a window to avoid the melee; he and two members of his band were slightly injured. During his career, four major riots occurred at his concerts, “partly because of integration”, according to his biographer Rick Coleman.”But also the fact they had alcohol at these shows. So they were mixing alcohol, plus dancing, plus the races together for the first time in a lot of these places.” In November 1957, Domino appeared on the Ed Sullivan TV program; no disturbance accompanied this performance. In the same year, the article “King of Rock ‘n’ Roll” in Ebony magazine featured Domino who said he was on the road 340 days a year, up to $2,500 per evening, and grossing over $500,000; Domino also told readers that he owned 50 suits, 100 pairs of shoes and a $1,500 diamond horseshoe stick pin. Domino had a steady series of hits for Imperial through early 1962, including “Walking’ to New Orleans” (1960, Pop number 6), co-written by Bobby Charles, and “My Girl Josephine” (Pop number 14) in the same year. He toured Europe in 1962 and met the Beatles who would later cite Domino as an inspiration. After returning, he played the first of his many stands in Las Vegas. Imperial Records was sold in early 1963, and Domino left the label. “I stuck with them until they sold out,” he said in 1979. In all, he recorded over 60 singles for Imperial, placing 40 songs in the top 10 on the R&B chart and 11 in the top 10 on the Pop chart, twenty-seven of which were double-sided hits. Research more about this great American Champion and share it with your babies. Make it a champion day!