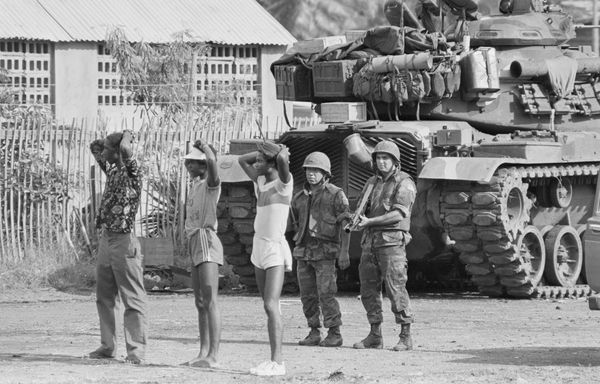 GM – FBF – Today’s American Champion event was The U.S. and a coalition of six Caribbean nations invaded the island nation of Grenada, 100 miles (160 km) north of Venezuela. Codenamed Operation Urgent Fury by the U.S. military, it resulted in military occupation within a few days. It was triggered by the strife within the People’s Revolutionary Government which resulted in the house arrest and execution of the previous leader and second Prime Minister of Grenada Maurice Bishop, and the establishment of the Revolutionary Military Council with Hudson Austin as Chairman. The invasion resulted in the appointment of an interim government, followed by democratic elections in 1984.Today in our History – October 25, 1983, The United States invasion of Grenada began at dawn on 25 October 1983Grenada had gained independence from the United Kingdom in 1974. The communist New Jewel Movement seized power in a coup in 1979 under Maurice Bishop, suspending the constitution and detaining several political prisoners. In September 1983, an internal power struggle began over Bishop’s leadership performance.Bishop was pressured at a party meeting to share power with Deputy Prime Minister Bernard Coard. Bishop initially agreed, but later balked. He was put under house arrest by his own party’s Central Committee until he relented. When his secret detention became widely known, Bishop was freed by an aroused crowd of his supporters. A confrontation then ensued at military headquarters between Grenadian soldiers loyal to Coard and civilians supporting Bishop. Shooting started under still-disputed circumstances. At least 19 soldiers and civilians were killed on 19 October 1983 including Bishop, his partner Jacqueline Creft, two other cabinet ministers and two union leaders.The Reagan administration in the U.S. launched a military intervention following receipt of a formal appeal for help from the Organisation of Eastern Caribbean States. In addition, the Governor-General of Grenada Paul Scoon secretly signaled he would also support outside intervention, but he put off signing a letter of invitation until 26 October. Reagan also acted due to “concerns over the 600 U.S. medical students on the island” and fears of a repeat of the Iran hostage crisis.The invasion began on the morning of 25 October 1983, just two days after the bombing of the U.S. Marine barracks in Beirut. The invading force consisted of the US Army’s 1st and 2nd battalions of the 75th Ranger Regiment, the 82nd Airborne and the Army’s rapid deployment force, Marines, Army Delta Force, Navy SEALs, and ancillary forces totaling 7,600 troops, together with Jamaican forces and troops of the Regional Security System (RSS).The force defeated Grenadian resistance after a low-altitude airborne assault by Rangers and the 82nd Airborne on Point Salines Airport at the south end of the island, and a Marine helicopter and amphibious landing on the north end at Pearls Airport. Austin’s military government was deposed and replaced, with Scoon as Governor-General, by an interim advisory council until the 1984 elections.The invasion was criticized by many countries, including Canada. British Prime Minister Margaret Thatcher privately disapproved of the mission and the lack of notice that she received, but she publicly supported it. The United Nations General Assembly condemned it as “a flagrant violation of international law” on 2 November 1983 with a vote of 108 to 9.The date of the invasion is now a national holiday in Grenada called Thanksgiving Day, commemorating the freeing of several political prisoners who were subsequently elected to office. A truth and reconciliation commission was launched in 2000 to re-examine some of the controversies of the era; in particular, the commission made an unsuccessful attempt to find Bishop’s body, which had been disposed of at Austin’s order and never found. The invasion also highlighted issues with communication and coordination between the different branches of the American military when operating together as a joint force, contributing to investigations and sweeping changes in the form of the Goldwater-Nichols Act and other reorganizations. Research more about this great American Champion liberation effort. Share it with your babies and make it a champion day!