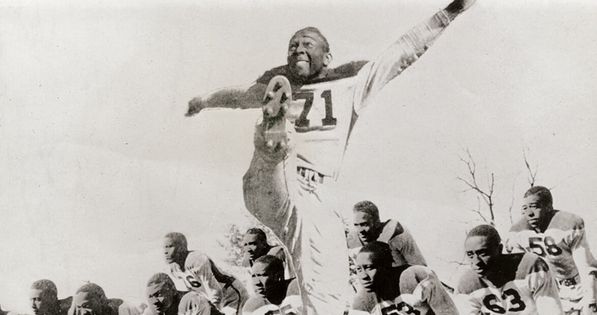 GM – FBF – Today’s American Champion event is The Legacy of Historically Black College and Universities on the Gridiron.Today in our History – December 27, 1892 – Biddle College (now Johnson C. Smith University) played Livingstone College.With a few exceptions, Historic Black Colleges and Universities (HBCU) were established in southern states after the Civil War. Private schools were most often religious affiliated. The Morrill Act of 1890 required states to establish land grant colleges if African-Americans were excluded from attending existing state schools. With segregation rampant in the 100 years after the Civil War, the only alternative for African-American college bound students were HBCU’s.The FoundationThe first HBCUs were founded in Pennsylvania and Ohio prior to the American Civil War, with the purpose of providing youths, who were largely prevented, due to racial discrimination, from attending established colleges and universities. The first two HBCUs were Cheyney University and Lincoln University both in Pennsylvania.CheyneyThe oldest, chronologically, HBCU was founded on February 25th, 1837. The African Institute moved from its original home in Philadelphia to a farm 25 miles outside the city once it was owned by another Quaker named George Cheyney. Until that point, it had been a secondary school. In 1914, it was renamed the Cheyney Training School for Teachers and became an institution of higher learning and awarded its first degree. In those 77 years between its inception and its formalization as a university, 97 other historically black colleges and universities had been founded. Today the school is known as Cheyney University of Pennsylvania. Although Cheyney no longer participates in football, their historical impact on and off the gridiron is undeniable.LincolnThe oldest, degree granting, HBCU was founded on April 29, 1854. Ashmun Institute was chartered by Presbyterian minister the Rev. John Miller Dickey and his wife, Sarah Emlen Cresson, who was a Quaker, to provide higher education in the arts and sciences for black men. In 1866, the school was renamed Lincoln University in honor of assassinated President Abraham Lincoln. After a 48 year hiatus, Lincoln football returned on August 30, 2008 where they defeated George Mason University 34-7.Livingstone Mzimba (left) and Harry Mantanga (right), students from the eastern Cape, were ends on the Lincoln College football team in 1907 when this photograph was taken. After graduating, both returned to South Africa and became Presbyterian ministers.Before the SEC & ACC there were HBCUsOn December 27, 1892 the first Black intercollegiate football game was played in North Carolina. Biddle College (now Johnson C. Smith University) played Livingstone College on Livingstone’s snowy lawn. Little did those men know, they would change the game of football forever. Research more about this great American Sport and share it with your babies. Make it a champion day!