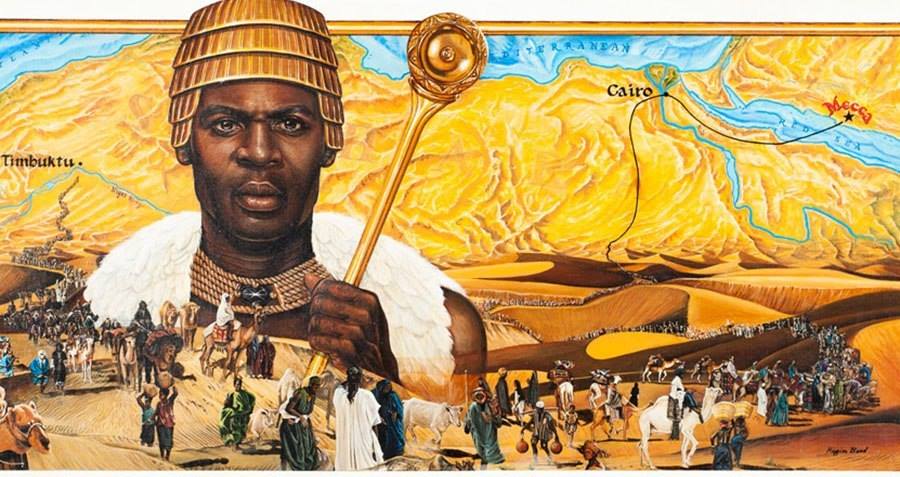 GM – FBF – For this is the mark of a wise and upright man, not to rail against the gods in misfortune.

Remember – “People who fear me should because if they are not up right in all things, I will teach them or destroy them. – Mansa Musa

Today in our History – January 31, 1324 – Mansa Musa travels to Mecca. Musa Keita I (c. 1280—c. 1337) was the tenth Mansa, which translates as “sultan” (king), “conqueror”, or emperor of the wealthy West African Mali Empire. At the time of Musa’s rise to the throne, the Malian Empire consisted of territory formerly belonging to the Ghana Empire in present-day southern Mauritania and in Melle (Mali) and the immediate surrounding areas. Musa held many titles, including “Emir of Melle”, “Lord of the Mines of Wangara”, “Conqueror of Ghanata”, and at least a dozen others. It is said that Mansa Musa had conquered 24 cities, each with surrounding districts containing villages and estates, during his reign. During his reign Mali may have been the largest producer of gold in the world at a point of exceptional demand. One of the richest people in history, he is known to have been enormously wealthy; reported as being inconceivably rich by contemporaries, “There’s really no way to put an accurate number on his wealth.”

Musa was a devout Muslim, and his pilgrimage to Mecca made him well-known across northern Africa and the Middle East. To Musa, Islam was “an entry into the cultured world of the Eastern Mediterranean”. He would spend much time fostering the growth of the religion within his empire.

Musa made his pilgrimage between 1324–1325. His procession reportedly included 60,000 men, including 12,000 slaves who each carried 1.8 kg (4 lb) of gold bars and heralds dressed in silks who bore gold staffs, organized horses, and handled bags. Musa provided all necessities for the procession, feeding the entire company of men and animals. Those animals included 80 camels which each carried 23–136 kg (50–300 lb) of gold dust. Musa gave the gold to the poor he met along his route. Musa not only gave to the cities he passed on the way to Mecca, including Cairo and Medina, but also traded gold for souvenirs. It was reported that he built a mosque every Friday.

Musa’s journey was documented by several eyewitnesses along his route, who were in awe of his wealth and extensive procession, and records exist in a variety of sources, including journals, oral accounts, and histories. Musa is known to have visited the Mamluk sultan of Egypt, Al-Nasir Muhammad, in July 1324.

But Musa’s generous actions inadvertently devastated the economies of the regions through which he passed. In the cities of Cairo, Medina, and Mecca, the sudden influx of gold devalued the metal for the next decade. Prices on goods and wares greatly inflated. To rectify the gold market, on his way back from Mecca, Musa borrowed all the gold he could carry from money-lenders in Cairo, at high interest. This is the only time recorded in history that one man directly controlled the price of gold in the Mediterranean. Research more about this great African Ruler and tell your babies. Make it a champion day!