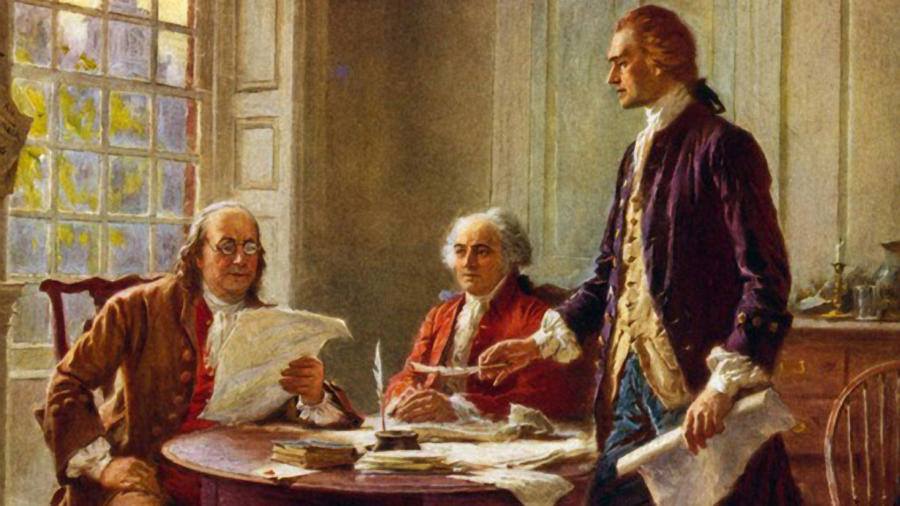 GM – FBF – Today is the 242th birthday of this grand experiment, where the people of 12 of the 13 colonies told the realm of England that they wanted their freedom. (Georgia did not attend the first Continental Congress because of fighting conflict with the Creek Indian. They did send represenatives to the second Congress. George Walton being one and my baby girl attends the George Walton Academy in Walton County at the county seat of Monroe, GA. Also, 124 years later “The Fight of the Century” would place heaveyweight boxer Jack Johson on a road to disaster. Enjoy!

John Arthur Johnson (March 31, 1878 – June 10, 1946), nicknamed the Galveston Giant, was an American boxer who, at the height of the Jim Crow era, became the first African American world heavyweight boxing champion (1908–1915). Among the period’s most dominant champions, Johnson remains a boxing legend, with his 1910 fight against James J. Jeffries dubbed the “fight of the century”. According to filmmaker Ken Burns, “for more than thirteen years, Jack Johnson was the most famous and the most notorious African-American on Earth”. Transcending boxing, he became part of the culture and the history of racism in America.

The fight took place on July 4, 1910, in front of 20,000 people, at a ring built just for the occasion in downtown Reno, Nevada. Jeffries proved unable to impose his will on the younger champion and Johnson dominated the fight. By the 15th round, after Jeffries had been knocked down twice for the first time in his career, Jeffries’ corner threw in the towel to end the fight and prevent Jeffries from having a knockout on his record. Johnson later remarked he knew the fight was over in the 4th round when he landed an uppercut and saw the look on Jeffries face, stating, “I knew what that look meant. The old ship was sinking.” Afterwards, Jeffries was humbled by the loss and what he’d seen of Johnson in their match. “I could never have whipped Johnson at my best”, Jeffries said. “I couldn’t have hit him. No, I couldn’t have reached him in 1,000 years.”

The “Fight of the Century” earned Johnson $65,000 and silenced the critics, who had belittled Johnson’s previous victory over Tommy Burns as “empty”, claiming that Burns was a false champion since Jeffries had retired undefeated. John L. Sullivan commented after the fight that Johnson won deservedly, fairly, and convincingly.

Johnson’s skill as a fighter and the money that it brought made it impossible for him to be ignored by the establishment. In the short term, the boxing world reacted against Johnson’s legacy. But Johnson foreshadowed one of the most famous boxers of all time, Muhammad Ali. In fact, Ali often spoke of how he was influenced by Jack Johnson. Ali identified with Johnson because he felt America ostracized him in the same manner because of his opposition to the Vietnam War and affiliation with the Nation of Islam. Research more about Jack Johnson and share with your babies. Make it a champion day!