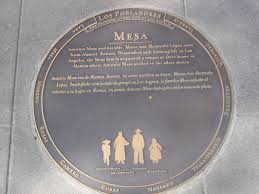 GM – FBF – Today, I want to share with you a story that many do not know about or you may have taken for granted. I checked the history books of middle school and high school students of not only the state in question but surrounding states. The closest that I found was in the towns close to the United States border in Mexico in a few states. Enjoy!

Remember – “One day hundreds of years from now this great exploration will still have the bonds of all of the cultures here today and beyond.” – Antonio Mesa

The Los Angeles Pobladores, or “townspeople,” were a group of 44 settlers and four soldiers from Mexico who established the famed city on this day in 1781 in what is now California. The settlers came from various Spanish castes, with over half of the group being of African descent.

Governor of Las California’s, a Spanish-owned region, Felipe de Neve called on 11 families to help build the new city in the region by recruiting them from Sonora and Sinaloa, Mexico. According to a census record taken at the time, there were two persons of African ancestry, eight Spanish and Black persons, and nine American Indians. There was also one Spanish and Indian person, with the rest being Spaniards.
According to the efforts of historian William M. Mason, the actual racial makeup of the pobladores was perhaps more racially balanced than not. Mason wrote that of the 44, only two were White, while 26 had some manner of African ancestry and that 16 of the group were “mestizos” or mixed Spanish and Indian people.

Black Mexicans Luis Quintero and Antonio Mesa, the only two named on the 1781 census, married mixed women and bore several children between them.

The pobladores founded the city “El Pueblo de Nuestra Señora La Reina de los Ángeles sobre el Río Porciúncula” (Spanish for The Town of Our Lady Queen of the Angels on the Porciuncula River) that day, after some priests found the area 10 years prior. Another historian, Dr. Antonio Rios-Bustamante, states that Los Angeles’ original settlers were even more mixed than the census stated, but was that African, Indian and European ancestry was a hallmark.

In Los Angeles, the El Pueblo de Los Angeles State Historic Park honored the pobladores in the 1950s with a plaque, but it was mysteriously removed. In a Los Angeles Times report, it was suggested that the removal of the plaque was racially motivated. However, in 1981 during the city’s bicentennial, the plaque was replaced. Research more about the start of the “City of Angles” and share with your babies. Make it a champion day!