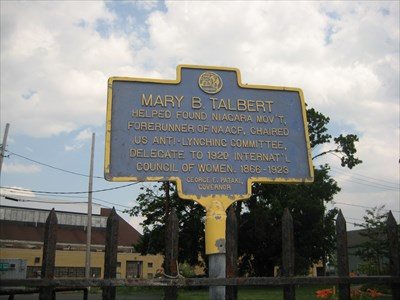 GM – FBF – The story that I would like to share with you today is about a Black woman who was a civil rights leader, a college graduate, educator and a high school principal. She was involved with the Niagara movement and the N.A.A.C.P. Enjoy her story!

Remember – “The greatness of nations is shown by their strict regard for human rights, rigid enforcement of the law without bias, and just administration of the affairs of life.” -Mary Burnett Talbert

Mary Burnett Talbert, clubwoman and civil rights leader, was originally born Mary Burnett on September 18, 1866 in Oberlin, Ohio, to Cornelius and Caroline Nicholls Burnett. Mary Burnett graduated from Oberlin High School at the age of sixteen and in 1886 graduated from Oberlin College with a literary degree at nineteen. Shortly afterwards, Burnett accepted a teaching position at Bethel University in Little Rock, Arkansas and quickly rose in the segregated educational bureaucracy of the city.

In 1887, after only a year at Bethel University, Burnett became the first African American woman to be selected Assistant Principal of Little Rock High School. Four years later in 1891, however, Burnett married William H. Talbert, an affluent business man for Buffalo, New York and resigned her position at Little Rock High School and moved to her husband’s hometown. One year later Mary B. and William Talbert gave birth to their only child, a daughter, Sarah May Talbert.

Over the next thirty years Mary Talbert established herself as an accomplished public and civic leader in Buffalo. In 1899 she became one of the founding members of the Phyllis Wheatley Club of Colored Women, Buffalo’s first affiliate of the National Association of Colored Women (NACW). Six years later in 1905, Mary B. Talbert secretly hosted black political activists including W.E.B Du Bois, John Hope and nearly thirty others around her dining room table for the first meeting of what would eventually become the Niagara Movement, a forerunner to the National Association of Advancement for Colored People (NAACP). Talbert became one of the first women to join the NAACP after its founding in 1909. In 1916, Talbert was elected President of the National Association of Colored Women (NACW) and the Vice President of the NAACP. In 1917 Talbert became one of a handful of black Red Cross nurses to serve on the Western Front of Europe after the United States entered World War I.

After the war Talbert returned to Europe to lecture on the importance of women’s rights and race relations. She also became a dedicated advocate of the Dyer Anti–Lynching Bill introduced in 1919 by Missouri Congressman Leonidas Dyer. In 1921 she became chair of the NAACP’s Anti–Lynching Committee. The next year, Mary B. Talbert became the first African American Women to win the NAACP’s Spingarn Award, the organization’s most significant honor for civil rights activity. Mary Burnett Talbert died in Buffalo, New York on October 15, 1923 at the age of 57. Research more about Black women and civil rights and share with your babies. Make it a champion day!