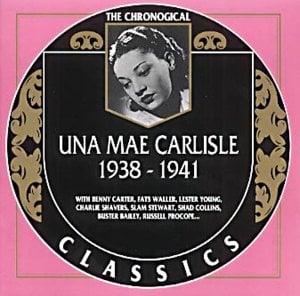 GM – FBF – Today’s American Champion was a pianist and singer during the 1930s and 1940s, auditioned for the Cotton Club, performed solo, and recorded in Europe. Born on December 26, 1915, to American Indian and black parents, she started singing at the age of three in her hometown of Xenia, Ohio.Today in our History November 7, 1956 – Una Mae Carlisle dies.Una Mae Carlisle was a popular jazz singer, pianist, and songwriter in the 1930s and 1940s. With hits like “Walking By The River”, “I Like It, Because I Love It”, “Don’t Try Your Jive On Me” and “Hangover Blues”. She might have become one of the greatest jazz entertainers if it wasn’t for failing health that affected her throughout her career and cut her life short. Her coy jiving style fascinated many and won the hearts of many. Una Mae Carlisle was born on December 26, 1915, in Xenia, Ohio. She started singing at the age of 3. She worked at various radio stations. It was at that time; she was “discovered” by Fats Waller late in 1932. He invited her to play on his radio show at station WLW in Cincinnati during Christmas week when Una Mae turned seventeen. He also asked her to play in his band. She was still in High School at the time, and her mother had approved her Christmas vacation in Cincinnati because she was to stay with her elder sister. When her vacation was over, she refused to return home, becoming a professional musician working with Waller at WLW. Fats’ contract with WLW expired in 1934 and he left Cincinnati for New York.Una Mae left America in 1936 to tour Europe, reportedly with the revue Blackbirds of 1936 and spent the next three years there, mostly in London and Paris. In London, on May 20, 1938, she recorded three discs that were released on the Vocalion label, including Don’t Try Your Jive On Me. Her backing band for that session included the expert West Indian musicians Dave Wilkins (trumpet) and Bertie King (clarinet and tenor sax). She became highly successful in England, Germany and France, where she worked at the Boeuf sur le Toit (“The Ox on the Roof”), a cabaret in the Rue du Colisée in Paris [named for the 1920 one-act farce by Jean Cocteau, scored by Darius Milhaud with themes based on Brazilian dance rhythms – a pantomime involving a boxer, a dwarf, a bookie, a woman in a red evening gown, a policeman who gets beheaded and is later revived and a noisy bar full of people]. While in Paris in 1939, she was one of two pianists in a combo headed by clarinetist Danny Polo (Danny Polo And His Swing Stars) which recorded four sides for Decca.She then returned to New York where she undertook several successful engagements and record dates, the first of which was a session with Fats Waller in November 1939 for Bluebird in which she and Fats combined to sing I Can’t Give You Anything But Love. She began recording on her own for Bluebird in the summer of 1940. She soon had several hits, including Walkin’ By The River with Benny Carter; Blitzkrieg Baby with Lester Young; and I See a Million People with Charlie Shavers and John Kirby. In 1941 she recorded with John Kirby and was nominal leader of several small bands, which featured such leading jazzmen as Russell Procope, Charlie Shavers, Ray Nance, Lester Young and Benny Carter. As early as 1938 Una Mae began suffering with mastoid trouble and in 1941 she was hospitalized for several weeks to treat this condition.Also in the early ’40s she became popular on radio and, before the decade was out, she had successfully transferred to television. Bluebird dropped her from its roster during the 1942-1944 American Federation of Musicians ban on recording (the “Petrillo Ban”), so she signed with Joe Davis for whom she recorded more than a dozen tracks, one of which was ‘Tain’t Yours with ace trumpeter Ray Nance, who had just left Duke Ellington’s band.In between bouts of ill health, she played clubs and hotels and appeared on radio shows, including a week-long salute to Fats Waller on WNEW in New York in February of 1945, approximately a year after his death. In the early ’50s she was still popular, playing with artists such as Don Redman, but her health was failing and she retired in 1954. Her career kept going into the 1950s when she became involved in films and her own radio and television shows. Her last studio session was for Columbia in New York on May 8, 1950. She retired due to her illness in 1954 and died in New York on November 7, 1956. Carlisle sang in a husky, intimate manner, and her warm sensual voice and use of delayed phrasing proved to be as effective on swing numbers as it was on ballads. Research more about this great American Champion and share it with your babies. Make it a champion day!