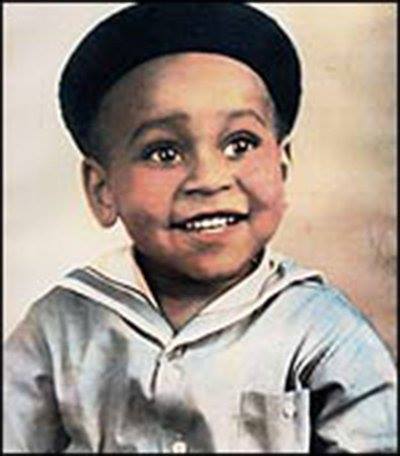 GM – FBF – Today, I want to share with you a story about a 14 year old young man who was in the wrong place at the wrong time. While visiting my grandmother in Perry, GA. during those days in the ’50’s and early ’60’s, I was told to not look at or talk to white people. She always reminded me that this could happen to you if you act and talk like you do back home in Trenton, NJ. A sad story that has been given a new Investigation.

Remember – “It never occurred to me that Bobo would be killed for whistling at a white woman.” — Simeon Wright, Emmett Till’s Cousin

Emmett Till was born in 1941 in Chicago and grew up in a middle-class black neighborhood. Till was visiting relatives in Money, Mississippi, in 1955 when the fourteen-year-old was accused of whistling at Carolyn Bryant, a white woman who was a cashier at a grocery store.

Four days later, Bryant’s husband Roy and his half-brother J.W. Milam kidnapped Till, beat him and shot him in the head. The men were tried for murder, but an all-white, male jury acquitted them.

Till’s murder and open casket funeral galvanized the emerging civil rights movement. More than six decades later, in January 2017, Timothy Tyson, author of The Blood of Emmett Till and a senior research scholar at Duke University, revealed that in a 2007 interview Carolyn admitted to him that she had lied about Till making advances toward her. The following year, it was reported that the Justice Department had reopened an investigation into Till’s murder.

Emmett Louis Till was born on July 25, 1941, in Chicago, the only child of Louis and Mamie Till. Till never knew his father, a private in the United States Army during World War II.

Mamie and Louis Till separated in 1942, and three years later, the family received word from the Army that the soldier had been executed for “willful misconduct” while serving in Italy.
Emmett Till’s mother was, by all accounts, an extraordinary woman. Defying the social constraints and discrimination she faced as an African-American woman growing up in the 1920s and ’30s, Mamie Till excelled both academically and professionally.

She was only the fourth black student to graduate from suburban Chicago’s predominantly white Argo Community High School, and the first black student to make the school’s “A” Honor Roll. While raising Emmett Till as a single mother, she worked long hours for the Air Force as a clerk in charge of confidential files.

Emmett Till, who went by the nickname Bobo, grew up in a thriving, middle-class black neighborhood on Chicago’s South Side. The neighborhood was a haven for black-owned businesses, and the streets he roamed as a child were lined with black-owned insurance companies, pharmacies and beauty salons as well as nightclubs that drew the likes of Duke Ellington and Sarah Vaughan.

Those who knew Till best described him as a responsible, funny and infectiously high-spirited child. He was stricken with polio at the age of 5, but managed to make a full recovery, save a slight stutter that remained with him for the rest of his life.

With his mother often working more than 12-hour days, Till took on his full share of domestic responsibilities from a very young age. “Emmett had all the house responsibility,” his mother later recalled. “I mean everything was really on his shoulders, and Emmett took it upon himself. He told me if I would work, and make the money, he would take care of everything else. He cleaned, and he cooked quite a bit. And he even took over the laundry.”

Till attended the all-black McCosh Grammar School. His classmate and childhood pal, Richard Heard, later recalled, “Emmett was a funny guy all the time. He had a suitcase of jokes that he liked to tell. He loved to make people laugh. He was a chubby kid; most of the guys were skinny, but he didn’t let that stand in his way. He made a lot of friends at McCosh.”

In August 1955, Till’s great uncle, Moses Wright, came up from Mississippi to visit the family in Chicago. At the end of his stay, Wright was planning to take Till’s cousin, Wheeler Parker, back to Mississippi with him to visit relatives down South, and when Till, who was just 14 years old at the time, learned of these plans, he begged his mother to let him go along.

Initially, Till’s mother was opposed to the idea. She wanted to take a road trip to Omaha, Nebraska, and tried to convince her son to join her with the promise of open-road driving lessons.
But Till desperately wanted to spend time with his cousins in Mississippi, and in a fateful decision that would have grave impact on their lives and the course of American history, Till’s mother relented and let him go.

On August 19, 1955—the day before Till left with his uncle and cousin for Mississippi—Mamie Till gave her son his late father’s signet ring, engraved with the initials “L.T.”
The next day she drove her son to the 63rd Street station in Chicago. They kissed goodbye, and Till boarded a southbound train headed for Mississippi. It was the last time they ever saw each other.

Three days after arriving in Money, Mississippi—on August 24, 1955—Emmett Till and a group of teenagers entered Bryant’s Grocery and Meat Market to buy refreshments after a long day picking cotton in the hot afternoon sun.

What exactly transpired inside the grocery store that afternoon will never be known. Till purchased bubble gum, and in later accounts he was accused of either whistling at, flirting with or touching the hand of the store’s white female clerk—and wife of the owner—Carolyn Bryant.

Four days later, at approximately 2:30 a.m. on August 28, 1955, Roy Bryant, Carolyn’s husband, and his half brother J.W. Milam kidnapped Till from Moses Wright’s home. They then beat the teenager brutally, dragged him to the bank of the Tallahatchie River, shot him in the head, tied him with barbed wire to a large metal fan and shoved his mutilated body into the water.

Moses Wright reported Till’s disappearance to the local authorities, and three days later, his corpse was pulled out of the river. Till’s face was mutilated beyond recognition, and Wright only managed to positively identify him by the ring on his finger, engraved with his father’s initials—”L.T.”
“It never occurred to me that Bobo would be killed for whistling at a white woman.” — Simeon Wright, Emmett Till’s cousin
“It would appear that the state of Mississippi has decided to maintain white supremacy by murdering children.” — Roy Wilkins, head of the NAACP.

Till’s body was shipped to Chicago, where his mother opted to have an open-casket funeral with Till’s body on display for five days. Thousands of people came to the Roberts Temple Church of God to see the evidence of this brutal hate crime.
Till’s mother said that, despite the enormous pain it caused her to see her son’s dead body on display, she opted for an open-casket funeral in an effort to “let the world see what has happened, because there is no way I could describe this. And I needed somebody to help me tell what it was like.”

“With his body water-soaked and defaced, most people would have kept the casket covered. [His mother] let the body be exposed. More than 100,000 people saw his body lying in that casket here in Chicago. That must have been at that time the largest single civil rights demonstration in American history.” — Jesse Jackson

The weeks that passed between Till’s burial and the murder and kidnapping trial of Roy Bryant and J.W. Milam, two black publications, Jet magazine and the Chicago Defender, published graphic images of Till’s corpse.

By the time the trial commenced—on September 19, 1955—Emmett Till’s murder had become a source of outrage and indignation throughout the country. Because blacks and women were barred from serving jury duty, Bryant and Milam were tried before an all-white, all-male jury.

In an act of extraordinary bravery, Moses Wright took the stand and identified Bryant and Milam as Till’s kidnappers and killers. At the time, it was almost unheard of for blacks to openly accuse whites in court, and by doing so, Wright put his own life in grave danger.

Despite the overwhelming evidence of the defendants’ guilt and widespread pleas for justice from outside Mississippi, on September 23, the panel of white male jurors acquitted Bryant and Milam of all charges. Their deliberations lasted a mere 67 minutes.

Only a few months later, in January 1956, Bryant and Milam admitted to committing the crime. Protected by double jeopardy laws, they told the whole story of how they kidnapped and killed Emmett Till to Look magazine for $4,000.
“J.W. Milam and Roy Bryant died with Emmett Till’s blood on their hands,” Simeon Wright, Emmett Till’s cousin and an eyewitness to his kidnapping (he was with Till the night he was kidnapped by Milam and Bryant), later stated. “And it looks like everyone else who was involved is going to do the same. They had a chance to come clean. They will die with Emmett Till’s blood on their hands.”
I
“I thought about Emmett Till, and I couldn’t go back [to the back of the bus].” — Rosa Parks

Coming only one year after the Supreme Court’s landmark decision in Brown v. Board of Education mandated the end of racial segregation in public schools, Emmett Till’s death provided an important catalyst for the American civil rights movement.

One hundred days after Till’s murder, Rosa Parks refused to give up her seat on an Alabama city bus, sparking the yearlong Montgomery Bus Boycott. Nine years later, Congress passed the Civil Rights Act of 1964, outlawing many forms of racial discrimination and segregation. In 1965, the Voting Rights Act, outlawing discriminatory voting practices, was passed.

[Emmett Till’s murder was] one of the most brutal and inhuman crimes of the 20th century. — Martin Luther King Jr.
Though she never stopped feeling the pain of her son’s death, Mamie Till (who died of heart failure in 2003) also recognized that what happened to her son helped open Americans’ eyes to the racial hatred plaguing the country, and in doing so helped spark a massive protest movement for racial equality and justice.

“People really didn’t know that things this horrible could take place,” Mamie Till said in an interview with Devery S. Anderson, author of Emmett Till: The Murder That Shocked the World and Propelled the Civil Rights Movement, in December 1996. “And the fact that it happened to a child, that make all the difference in the world.”

Timothy Tyson’s Book and Revived Investigation
Over six decades after Till’s brutal abduction and murder, in January 2017, Timothy Tyson, author of The Blood of Emmett Till and a senior research scholar at Duke University, revealed that in a 2007 interview Carolyn Bryant Donham (she had divorced and remarried) admitted to him that she had lied about Till making advances toward her.

As of Last Week, July 15, 2018 – the case is re-opened and new Information is being viewed. The Justice Department declined to comment on Thursday, but it appeared that the government had chosen to devote new attention to the case after a central witness, Carolyn Bryant Donham, recanted parts of her account of what transpired in August 1955. Two men who confessed to killing Emmett, only after they had been acquitted by an all-white jury in Mississippi, are deadResearch more about this great American and share with your babies as it was told to me. Make it a champion day!