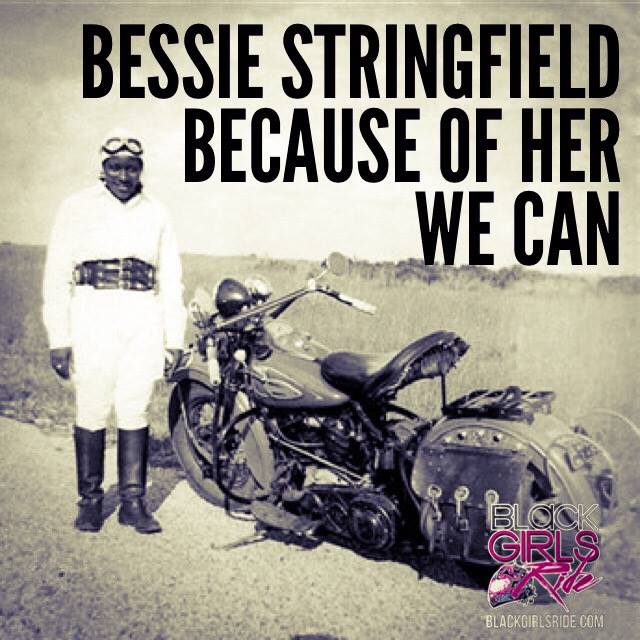 GM – FBF – I would like to thank everyone who visited my daily posts during Woman’s History Month, just like Black History month there is not enough time to tell all of the great stories that women have and still do everyday. We now will travel into the Month of April telling and reminding all that our history is 365 – 24/7 and I will share individuals and organizations that school books have left out and please share with our babies. PEACE!

Today in our History – March 31, 2002 Bessie Stringfield was inducted into the Motorcycle Hall of Fame.

Bessie Stringfield (February 9, 1911 – February 16, 1993), nicknamed “The Motorcycle Queen of Miami”, was the first African-American woman to ride across the United States solo, and during World War II she served as one of the few motorcycle despatch riders for the United States military.

Credited with breaking down barriers for both women and Jamaican-American motorcyclists, Stringfield was inducted into the Motorcycle Hall of Fame. the award bestowed by the American Motorcyclist Association (AMA) for “Superior Achievement by a Female Motorcyclist” is named in her honor.
Stringfield was born in Kingston, Jamaica, in 1911 to a black Jamaican father and a white Dutch mother. The family migrated to Boston when she was still young. Her parents died when Stringfield was five and she was adopted and raised by an Irish woman.

At the age of 16 Stringfield taught herself to ride her first motorcycle, a 1928 Indian Scout. In 1930, at the age of 19, she commenced traveling across the United States. She made seven more long-distance trips in the US, and eventually rode through the 48 lower states, Europe, Brazil and Haiti. During this time, she earned money from performing motorcycle stunts in carnival shows. Due to her skin color, Stringfield was often denied accommodation while traveling, so she would sleep on her motorcycle at filling stations. Due to her sex, she was refused prizes in flat track races she entered.

During WWII Stringfield served as a civilian courier for the US Army, carrying documents between domestic army bases. She completed the rigorous training and rode her own blue 61 cubic inch Harley-Davidson. During the four years she worked for the Army, she crossed the United States eight times. She regularly encountered racism during this time, reportedly being deliberately knocked down by a white male in a pickup truck while traveling in the South.

In the 1950s Stringfield moved to Miami, Florida, where at first she was told “nigger women are not allowed to ride motorcycles” by the local police. After repeatedly being pulled over and harassed by officers, she visited the police captain. They went to a nearby park to prove her riding abilities. She gained the captain’s approval to ride and didn’t have any more trouble with the police.

She qualified as a nurse there and founded the Iron Horse Motorcycle Club. Her skill and antics at motorcycle shows gained the attention of the local press, leading to the nickname of “The Negro Motorcycle Queen”. This nickname later changed to “The Motorcycle Queen of Miami”, a moniker she carried for the remainder of her life. In 1990 the AMA paid tribute to her in their inaugural “Heroes of Harley-Davidson” exhibition she having owned 27 of their motorcycles. Stringfield died in 1993 at the age of 82 from a heart condition, having kept riding right up until the time of her death.

In 2000 the AMA created the “Bessie Stringfield Memorial Award” to recognize outstanding achievement by a female motorcyclist. Stringfield was inducted into the Motorcycle Hall of Fame in 2002. She married and divorced six times, losing three babies with her first husband. She ended up keeping the last name of her third husband, Arthur Stringfield, since she had made it famous. Research more about this great American and share with your babies. Make it a champion day!